An airport for migratory birds is being created close to one of China's most populous cities. It's not as weird as it sounds.

At first glance, birds and airports do not seem like a particularly harmonious combination. Our feathered friends generally don't feel too comfortable living between runways and the wings of their (very) distant giant relatives. But in China, this is about to change with the creation of the "Lingang Bird Sanctuary."

This "airport" will not have any of the usual aircraft noise, and it will not have barren tarmac runways. It will be solely for the use of migrating birds in the peace and quiet of nature.

McGregor Coxall, designers and landscape architects based in Australia, China, and England, came up with the plans. They won an international design competition that was initiated and co-financed by the Asian Development Bank (ADB) and the Tianjin Economic and Technological Development Area (TEDA), which is located close to Tianjin, China. This port city is home to the project.

The idea behind the catchy "airport" project is actually to create a giant nature reserve. But since this pilot project is happening  right on the East Asian-Australasian Flyway (EAAF), a key migration route for birds, the term "Bird Airport" seems appropriate. Fifty million migratory birds make use of this flyway every year - and they are very likely to use the planned oasis in Tianjin for a stopover, before they continue their journey. These birds cover huge distances. The EAAF crosses 22 countries, among them China, Japan, New Zealand, Indonesia, Thailand, Russia, and the USA (Alaska). Some birds fly more than 11,000 kilometers, and go ten days without nourishment just to make it to Tianjin.

"Birds' migration routes are a wonder of the natural world," says Adrian McGregor, director and founder of McGregor Coxall. "The proposed Bird Airport will be a globally significant sanctuary for endangered migratory bird species." 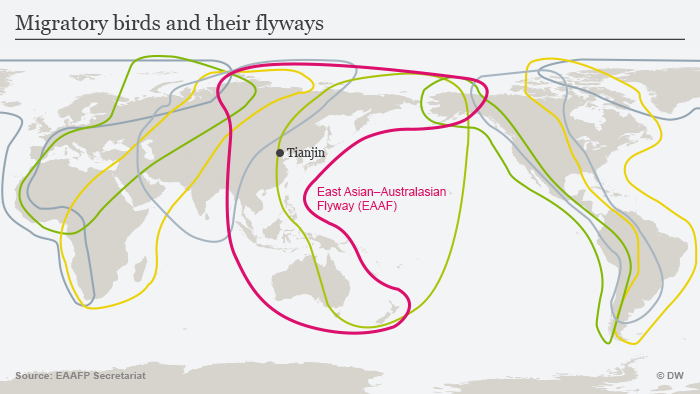 There are nine major migration routes worldwide, of which EAAF is one of the longest

Up to now, birds have tended to steer clear of resting in the area, even after their long flying ordeal. Food sources and space are scarce on account of the increasing urbanization of coastal areas.

But this will soon change. In the future - according to the McGregor Coxall  proposals - hundreds, if not thousands of arrivals and departures will be taking place here every day.

But that is still some time away.  First of all, a giant waste disposal site has to be cleared and cleaned so that over 50 species of birds can feel at ease there in the future. Construction will probably start at the end of 2017.

The new site will include three different water habitats, including an island lake with shallow rapids, reed areas, and mud habitats. Additionally, bushes where birds can hide away, 20 hectares of forest, and a large visitor education and research center called the "Water Pavilion" are in the pipeline.

"The Bird Airport will utilize next generation water design, helping to shape a progressive environmental vision for future projects in the greater Beijing region," Jack Qian, director of the McGregor Coxall office in Shanghai, told DW. For instance treated waste water and rain will be recycled.

Tourists in search of birds and nature are also being taken into account. McGregor Coxall intends to create seven kilometers of walking paths.  The sanctuary is set to be completed in 2018.

The port city Tianjin is among China's ten most highly populated cities. Real airports in the region often have to be closed due to smog. So the Bird Airport, alias a giant bird sanctuary and nature area, would help "provide new green lungs for the city of Tianjin",  says Adrian McGregor.

More than 20 million migratory birds are illegally killed and traded in the Mediterranean basin each year. A new UN task force has been set up to tackle the problem. We asked coordinator Carmen Naves to tell us more. (15.07.2016)

From flamingos in Mumbai to the foie gras on your plate, in this edition of Living Planet, we look at the plight of migratory birds around the world. (12.05.2016)

China is currently developing an airport solely for birds, situated along a major migration route. Curious what this will look like? Here are the first designs. (06.03.2017)