Chinese authorities have begun the mass slaughter of poultry at a Shanghai market after a bird flu virus was detected there, state media said. The H7N9 virus has reportedly killed five people. 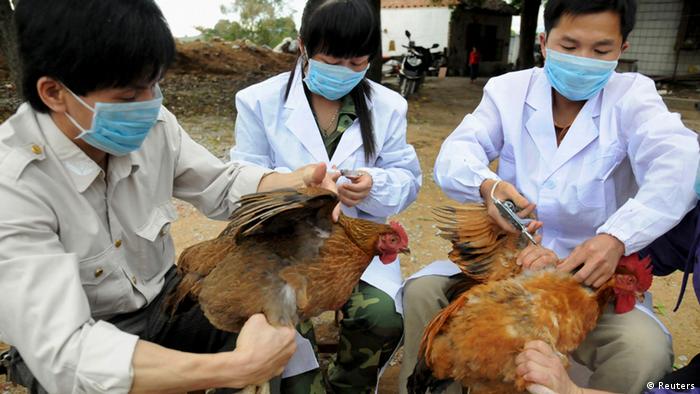 The national avian flu reference laboratory found the strain to be "highly congenetic with those found on persons infected with H7N9 virus."

Officials have ordered that the culled birds, their excrement and contaminated food be disposed of safely, as well as an investigation into the source of the infected birds. The market and vehicles used to transport poultry are also to be disinfected.

Health officials are also currently treating a person for flu-like symptoms who had been in close contact with one of the dead, the agency added. Previously there had been no evidence of possible human-to-human transmission.

On Thursday, China announced the death of two people from H7N9, while the total number of infection cases has risen to 14.

One of the dead was a 48-year-old man who had worked in poultry transportation in the eastern province of Jiangsu, state broadcaster China Central Television quoted a health official as saying. The second victim was a 64-year-old man from Huzhou City in the neighboring province of Zheijiang, who was under treatment for the virus after falling ill on March 29, state media said.

The first two H7N9 deaths happened in February but were not reported by the government until March. Authorities said the delay in reporting was due to the time it took to determine the cause of the illnesses. This particular strain of the virus had never before been found in humans.

The World Health Organization said Wednesday it had ruled out the possibility of a pandemic because there was no evidence H7N9 could be transmitted from person to person.

A more common strain of bird flu, H5N1, can be transmitted between humans and killed more than 360 people worldwide between 2003 and March this year, the WHO said.

The deaths of four Cambodians from avian flu have health experts worried. Just four weeks into the year, the toll is Cambodia's second highest since avian flu was first detected here in 2005. (30.01.2013)