China furious with global outcry over Xinjiang and Hong Kong | Asia| An in-depth look at news from across the continent | DW | 08.10.2020 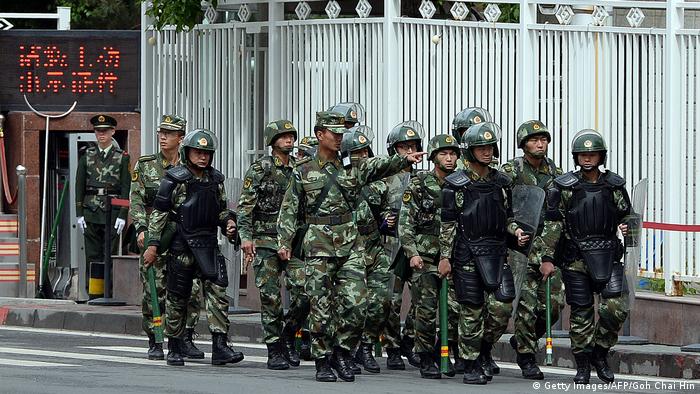 In the declaration drafted by Germany and presented at the UN General Assembly in New York on Tuesday, 39 predominantly Western countries denounced China for gross human rights violations in the western Chinese province of Xinjiang and the autonomous region of Tibet, and for limiting political and personal freedoms in Hong Kong.

In the statement endorsed by the UK, the US and many EU countries, Germany's ambassador to the UN, Christoph Heusgen, decried the "widespread surveillance [that] disproportionately continues to target Uighur and other minorities" as well as "forced labor and forced birth control including sterilization." He also criticized the existence of political re-education camps in Xinjiang, where more than a million people had reportedly been detained.

Regarding Hong Kong, the German ambassador expressed "deep concerns" about elements of the recently enacted national security law, which allowed for certain cases to be transferred for prosecution to mainland China. He also demanded that Beijing ensure "freedoms of speech, press and assembly."

China's ambassador to the UN, Zhang Jun, responded with an irate statement, saying the accusations were "groundless" and that his country "opposes interference in internal affairs." In separate statements, Pakistan and Cuba voiced their support for Beijing's position, as did a group of mainly African and Arab countries, Russia and Venezuela.

Did Germany get too friendly with China?

Beijing's anger was in part due to the fact that it had not anticipated such a surge in support for the declaration, according to a diplomat who spoke to DW on condition of anonymity.

Other officials, who also wished to remain unnamed, told DW that Beijing had not expected more than 30 countries to join and had begun a political pressure campaign to prevent countries from signing the statement.

In the end, 39 countries signed on to the declaration, 16 more than last year, with Bosnia and Herzegovina joining literally at the last minute. This was the result of weeks of lobbying by diplomats from Germany, the UK and the US, who clandestinely spoke to other UN states asking for their support. The list remained classified until minutes before Germany's UN ambassador Heusgen read the statement in New York, for fear signatories might be poached by China at the last moment.

Let's be friends, or else

China is known to play hardball with countries that it thinks are planning to sign on to international statements criticizing its activities. "Countries do report to us a significant amount of pressure, including threats around economic cooperation from China if support is not given", British Ambassador to the UN, Jonathan Allen, said in a press conference after Tuesday's UN meeting.

In 2019, for example, Beijing threatened to thwart Austria's attempts to find a new location for its embassy in the Chinese capital if it signed a declaration condemning the Asian superpower's human rights violations. Vienna signed the statement anyway, but another European signatory was cut off from Chinese economic support after endorsing the declaration.

On another occasion, Lebanon was told Beijing would oppose the extension of the UNIFIL peacekeeping mission in the country if it didn't side with China, a permanent member of the UN Security Council.

Several UN diplomats told DW that they were being hounded by their Chinese counterparts in the run-up to issuing statements critical of the Asian country. One spoke about how aggressively she was pursued by a diplomat from Beijing. "They're in your face all the time," she said. "They call you, they text you, in the evenings, on the weekends, it's incessant."

One time, she recalls her Chinese counterparts deliberately creating a situation to intimidate her. "They would gang up on me, ask me to come outside where more of their colleagues were waiting, it was a three-on-one situation and they were really aggressive."

Several other diplomats, who wished to remain unnamed, told DW that Chinese embassy staff had, on various occasions, presented them with false information about what their superiors had allegedly agreed to, to wrest compliance.

DW reached out to the Chinese mission in the UN for comment, but is yet to receive a response.

"Some countries are happy to be on China's side, like Russia, Syria, Cuba or Venezuela," Lou Charbonneau, United Nations director at Human Rights Watch (HRW), told DW, adding, "Others endorse China's position only because of fear of repercussions."

Indeed, China's aggressive tactics seem to work sometimes. Last year, Bahrain, Qatar, Oman, and Saudi Arabia supported a delicately formulated statement delivered by Kuwait, in which it spoke out in favor of human rights, but was careful not to antagonize China. This year, Saudi Arabia and Bahrain showed up with a similar announcement.

Read more: Are EU-China trade relations at a crossroads?

However, Chinese influence is growing in poorer countries, like those in Africa, or in European countries like Greece, where it continues to invest heavily. This may have an impact on garnering international support against rights violations in the country.

But HRW's Charbonneau believes this strategy won't pay off in the long run and the number of countries critical of China over the country's human rights record will keep going up. "The more countries speak out, the more others feel they can do the same," he said.

"With every one of these statements and with every country that signs on to them, the political costs for China's non-compliance with international norms go up," Charbonneau underlined. "If they want to be part of the international community, they need to change."