China and Brazil ink trade deal ahead of BRICS summit

BRICS members China and Brazil have agreed to trade the equivalent of up to $30 billion per year in their own currencies. The agreement will take almost half of their trade exchanges out of the US dollar zone. 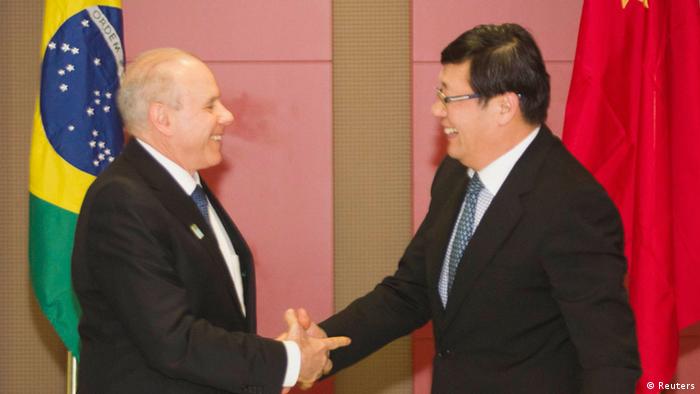 The agreement between China and Brazil on Tuesday, inked hours before the start of the BRICS summit in South Africa, is due to last three years. China is the largest economy within the emerging powers group, which also includes Russia, India and South Africa.

"Our interest is not to establish new relations with China, but to expand relations to be used in the case of turbulence in financial markets," Brazilian Central Bank Governor Alexandre Tombini told reporters after the signing.

Brazilian Economy Minister Guido Mantega (pictured above, left) described the deal, which is called a bilateral currency swap accord, as "a sort of umbrella agreement." However he did not specifically define areas or categories that would be affected. The deal was signed with Chinese Finance Minister Lou Jiwei (above, right).

Almost half of Brazil's exports to China consist of iron ore and related products. China's biggest exports to Brazil are electronics and machinery.

Mantega said the trade and currency agreement would act as a buffer in the financial markets.

"If there were shocks to the global financial market, with credit running short, we'd have credit from our biggest international partner, so there would be no interruption of trade," he added.

During the BRICS summit, Brazil, Russia, India, China and South Africa are expected to endorse plans to create a joint foreign exchange reserves pool and an infrastructure bank.

Finance ministers at the BRICS summit, which will begin its fifth edition with a dinner banquet hosted by South African President Jacob Zuma, are expected to present a feasibility study on the establishment of a new development bank to challenge the World Bank's decades-long dominance. Many in the developing world consider the World Bank, as well as the International Monetary Fund, to be western-dominated.

Each of the five nations could be expected to contribute as much as $10 billion to capitalize the bank. Some have suggested that South Africa, the smallest country in the group, could host the bank in Pretoria in lieu of providing large cash injection.

Zuma has said the summit is also an opportunity to address South Africa's economic problems.

"BRICS provides an opportunity for South Africa to promote its competitiveness," he said. "It is an opportunity to move further in our drive to promote economic growth and confront the challenge of poverty, inequality and unemployment that afflicts our country."

Presidents Dilma Rouseff of Brazil, Vladimir Putin of Russia, Prime Minister Manmohan Singh of India, as well as Xi and Zuma, will be in attendance for the presentation from economics ministers on Wednesday.

The BRICS nations account for 25 percent of global GDP and 40 percent of the world's population, economic data show.