President Michelle Bachelet has signed a bill intended to ease the strict ban on abortion in Chile, despite a powerful anti-abortion lobby. Abortion of any type has been illegal since the era of Pinochet dictatorship. 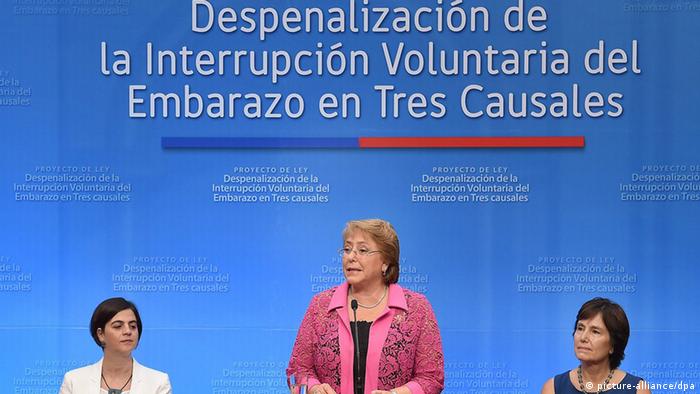 The new legislation, which Bachelet sent to the Chilean Congress on Saturday, would allow a termination of pregnancy in three types of cases: deadly birth defects, danger to the mother's life, or pregnancy which is a product of rape.

President Bachelet, who is a qualified pediatrician, said it was time to change the strict anti-abortion laws:

"Facts have shown that the absolute prohibition and criminalization of abortion has not stopped the practice," the president said, adding that illegal terminations of pregnancy in Chile "often take place in conditions that pose great risks to the life and health of women."

There is no precise data on how many illegal abortions are carried out in Chile, but the estimates vary from 15,000 to 160,000 per year. In each of those instances, women having an abortion face the risk of spending five years in prison.

A number of opposition MPs and even some members of the president's New Majority bloc already announced they would fight against the decriminalization.

The absolute ban of abortion is enforced according to a law adopted in the closing days of Augusto Pinochet's dictatorship in 1989, and several attempts to change the regulations have already been blocked in Congress.

'A step in the right direction'

Although the anti-abortion lobby and the Catholic church are still powerful factors in the socially conservative South American country, current polls show that some 70 percent of Chileans support Bachelet's bill.

"This is a step in the right direction. But the law also has to assure that women, regardless of their economic situation, can access abortion services," said Ana Piquer, head of Amnesty International in Chile, referring to fears that health insurance policies may not cover all costs.

The attitudes toward termination of pregnancy have been changing during the last several years, partly because of a 2013 case of an 11-year old-girl who became pregnant after being raped by her stepfather.

President Bachelet, who already served as Chile's first female president from 2006 to 2010, has promised to change some of the longest-lasting remnants from the Pinochet-era, and bridge Chile's wide income gap.

Among other initiatives, she has advocated tax reform, modernization of the education system, and a law allowing civil unions for same-sex and unmarried heterosexual couples.