The weekend poll to pick delegates to revise Chile's dictatorship-era constitution was a core demand of fatal protests in 2019 over social inequality. 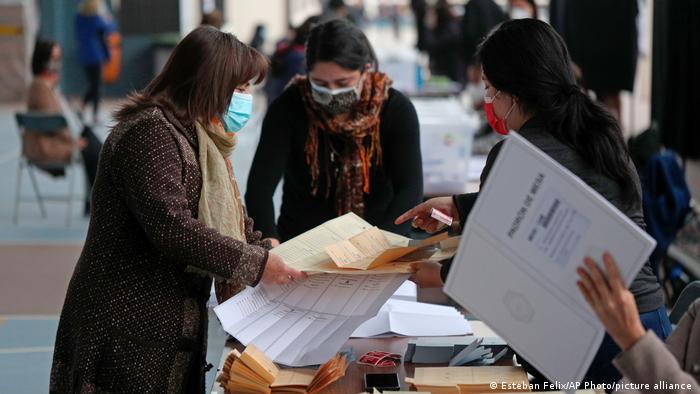 Chileans are casting ballots in a weekend poll to elect 155 delegates who will be tasked with drafting a new constitution. The vote has been billed as the country's most vital since the fall of the military dictatorship in 1990.

The delegates will have 9 months to revise the constitution.

Any reforms will require a two-thirds agreement within the new Constituent Assembly, before the constitution is approved, or rejected, by the nation in 2022.

Overhauling Chile's existing constitution — enacted in 1980 by the late General Augusto Pinochet's junta — was a widespread demand focused on social inequality during mass protests in October 2019.  The unrest claimed 36 lives and was triggered by hikes in public transport fares.

In a subsequent plebiscite, in October last year, 80% of voters backed the rewrite procedure, which excludes current members of congress.

This weekend's poll, entering its second day Sunday was seen largely a battle between candidates of Chile's left and right, said analysts. Some 1,300 candidates were vying for a place in the Constituent Assembly, to be made up of 50% women, and with 17 seats reserved for indigenous representatives.

"It's the hour for us, for all who have been fighting for a most just country, to be part of the change," said constitutional panel candidate Natalia Aravena, a 26-year-old nurse, who lost an eye during Chile's recent wave of protests.

Chile reputedly has the third most multimillionaires in Latin America.

Leftist parties, however, want privatized resources to be returned to state control and more public spending on education, health, pensions and social welfare.

Casting his ballot in Santiago, President Sebastian Pinera said: "I hope we have a constitution that captures the soul of our nation."

Economist Silvia Navarrete, with her daughter in her arms, said she voted for a system in which "rights and duties are really fair for all human beings."

Last February, a report by the Organization for Economic Cooperation and Development (OECD) said 53% of Chilean households were economically vulnerable, with the poorest 20% gleaning a mere 5.1% of total income.

It traced low levels of satisfaction to "persistently high inequality."

Campaigning ahead of this weekend's constitutional delegate election was complicated by Chile's exposure to the COVID-19 pandemic.

Vaccination rates are relatively high in the nation of 19 million, where some 30,000 people have died of the coronavirus.