A Chilean bishop's office in Rancagua has dismissed 14 priests suspected of covering up cases of child abuse by pedophile priest Fernando Karadima in the 1980s and '90s. The scandal has rocked Pope Francis' papacy. 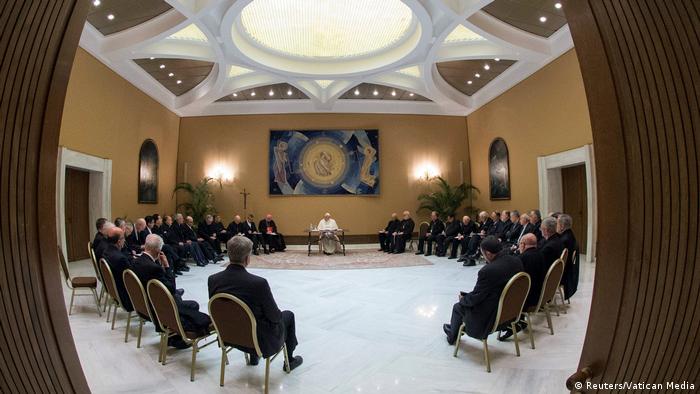 "Fourteen priests no longer are allowed to carry out their duties... These priests have taken part in actions that may be civilian crimes as well as within the church," the bishop's office said in a statement.

The moves comes after 34 bishops offered on Friday to resign en masse over the child sex abuse scandal after being summoned to meet with Pope Francis in the Vatican — the first time a country's entire senior Roman Catholic prelate has offered step aside all at once.

Pope admits he made 'grave errors' in child abuse scandal

Several members of Chilean church's hierarchy stand accused of ignoring and covering up acts of child abuse by Chilean pedophile priest Fernando Karadima in Rancagua during the 1980s and 1990s.

Ahead of the bishops' meeting with the pope, Francis promised in a short declaration to make "changes" and "restore justice" to the Chilean church to the bishops.

However, a letter distributed by Francis during the meeting saw the pope go much further in his indictment of the Chilean church.

In the letter, which was leaked to Chilean broadcaster T13, Francis evokes "crimes" and "painful and shameful sexual abuse of minors, abuses of power and conscience by ministers of the Church." The letter also advocated the dismissal of certain prelates and called for the roots of abuse within Chile's "elitist and authoritarian" church to examined.

However, despite the harsh words, the pope has yet to formally announce whether he will accept the resignations.

Earlier on Tuesday, Francis announced that he planned to meet with more victims of Karadima, as the pontiff seeks to make amends for the scandal that goes on to haunt his papacy.

The Vatican announced that Francis would meet with nine victims from June 1-3. Five of the victims are themselves priests, while two are clerics and the other two lay people.

It comes just weeks after the pope met with three other victims. "With this new meeting, Pope Francis wants to show his closeness to the abused priests, to accompany them in their sorrow and to listen to their valuable opinion in order to improve the current preventive measures and the fight against abuses in the Church," a Vatican said in a statement.

The meetings are widely viewed as a bid by Francis to save face. During a visit to Chile earlier this year, Francis appeared to initially doubt the allegations that a bishop had witnessed Karadima's abuse but done nothing about it.

However, shortly afterward, the pope sent the Vatican's most experienced abuse investigator to Chile, before admitting he had made "grave mistakes" in his handling of the case. On the strength of a subsequent 2,300-page report, Francis summoned the bishops for last Friday's meeting.

Since 2000, around 80 Roman Catholic priests have been reported to authorities in Chile for alleged sexual abuse. Many point to Chile's long tradition of not having the church subject to civilian law as to why so many prelates and priests lent themselves to such impunity.

Elsewhere, an Australian archbishop, who became one of the world's highest-ranking church officials found guilty of covering up cases of child sex abuse, announced on Wednesday that he would step down from official duties.

Adelaide Archbishop Philip Wilson, 67, was found guilty on Tuesday of concealing the crimes of a pedophile priest in the 1970s. He is set to be sentenced in June and faces a maximum jail term of two years.

In a trip meant to mend the wounds of abuse in Chile, Pope Francis has defended a bishop accused of covering up sexual abuse and allowing it to continue. He said man is innocent until proven guilty. (19.01.2018)

The Vatican has decided to dispatch Charles Scicluna, an expert on sex abuse scandals, to Chile over allegations against Bishop Juan Barros. Pope Francis prompted outrage when he dismissed the case as "slander." (30.01.2018)