Fernando Karadima was a key figure in a sexual abuse case that sent shockwaves through the Catholic Church. Aged 90, he died of bronchopneumonia and kidney failure in a nursing home. 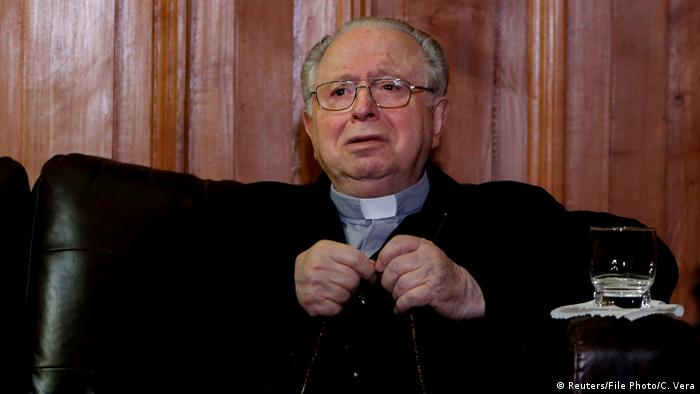 Karadima, who was defrocked in 2018, always maintained his innocence

Former Chilean priest Fernando Karadima, a key figure in a sexual abuse case that rocked the Catholic Church, has died at the age of 90.

According to his death certificate, Karadima died on Sunday of bronchopneumonia and kidney failure in the nursing home where he resided.

Karadima headed a parish in an upscale neighborhood of the Chilean capital, Santiago, from 1980 to 2006, forging close links to the Latin American country's political and economic elites.

Those allegations came to light when victims Juan Carlos Cruz, James Hamilton and Jose Andres Murillo told of the abuses they suffered.

Regarding the former priest's death, the three victims released a statement, saying: "Everything we had to say about Karadima has been said. He was one more link in this culture of perversion and cover-up in the Church."

After being defrocked in 2018, Karadima was told to retire to a lifetime of penance and prayer for sexually abusing minors.

Karadima, who always denied any wrongdoing, was not prosecuted over the accusations because the statute of limitations had expired.

The case did, however, plunge the Andean country's Catholic Church into disarray, eviscerating its popularity and sparking the investigation of hundreds of other accusations of abuse.

A senior cleric, Karadima trained many of the current hierarchy in Chile.

According to official figures, more than 200 members of the Chilean church had been investigated for more than 150 sexual abuse cases, up to 2019.

Those investigations have identified more than 240 victims, including 123 minors.

Pope Francis visited Chile in 2018, but caused outrage when he discredited the victims. He later apologized and expressed "shame" for his handling of sexual abuse by clergy in Chile, asking for forgiveness from the victims whom he'd previously dismissed.

Leaving the church in Germany: 'A liberation'