Intolerance comes with age and location can play a part, too, according to a new study. Most German children said they are friends with kids from other countries. 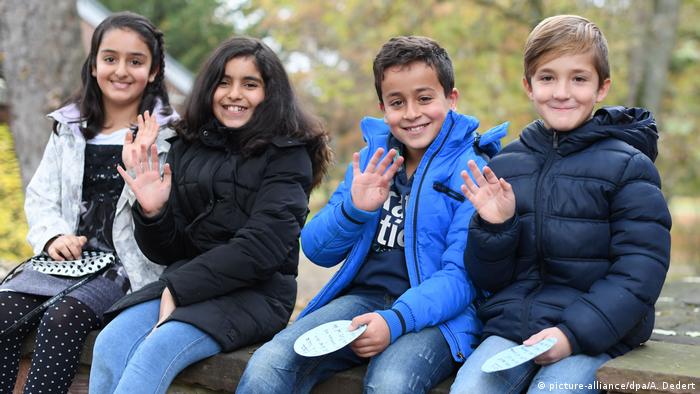 An annual survey of 10,000 German schoolchildren between the ages of nine and 14, found that three-quarters of those questioned were strongly in favor of taking in immigrants and refugees from countries that are struggling with poverty or violence, according to the LBS Kinderbarometer (children's barometer) poll published Thursday.

The study found that although the majority of children were clearly in favor of immigration, 10 percent were strictly against it.

The study showed that as children got older they became less tolerant and also that place of residence was clearly a factor in attitudes. Children from the populous state of North Rhine-Westphalia and the city states of Bremen, Hamburg and Berlin were much more open to immigration than children from the eastern German states of Brandenburg, Saxony, Saxony-Anhalt and Thuringia.

Nearly two-thirds (61 percent) of those children surveyed also said they were friends with children from other nations. The report noted that this was especially the case when it came to children who had immigrant backgrounds themselves.

"Dealing with people from other nations has become part of everyday life for most schoolchildren," said Christian Schröder, a spokesman for LBS, the German banking federation that commissions the study.

Additionally, the study found that roughly one-third of the children surveyed said they had friends who were either mentally of physically handicapped. "The aim of fostering inclusion is obviously having an effect as these numbers reflect a clear increase over those from 2009 and 2014," Schröder said.

The organization ProKids has conducted surveys for LBS since 1997. The survey is done according to Article 12 of the UN Convention on the Rights of the Child and asks children about their fears and desires as well as the topics of friends, family and school.