Childrens' Rights in Africa - Young But Not Powerless

African children can have difficult lives. They may have to walk for miles to school or maybe they live in a conflict zone - we introduce you to some of the common challenges and the basic rights of young Africans. 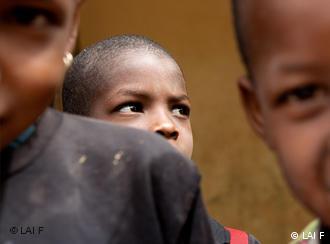 Life isn't a piece of cake for many children in Africa.

While European kids are still playing with toys, African children usually have to work. In the country, hundreds of thousands go to school in the morning and in the afternoon they help their parents in the fields. And many have to look after themselves at a pretty tender age, because their parents can't feed them.

African children often have a tough life. They are more likely to die before the age of five than children on any other continent. They sometimes live in areas afflicted by violence and insecurity. Besides, they are less likely to get a good education than their contemporaries in Asia, America or Europe.

Learning by Ear tells the stories of some of these small African heroes. But it isn't all about the struggles they face. It's also about people fighting for children’s' rights and trying to make a difference. Our programs also reflect the progress that has been made. For instance, there’s a children's parliament that is fighting for children’s rights in Nigeria.