Donald Trump's political ascent is mobilizing fierce opposition. Days before a string of key primaries, the Republican front-runner was forced by protesters to call off a major rally in Chicago, reports Spencer Kimball. 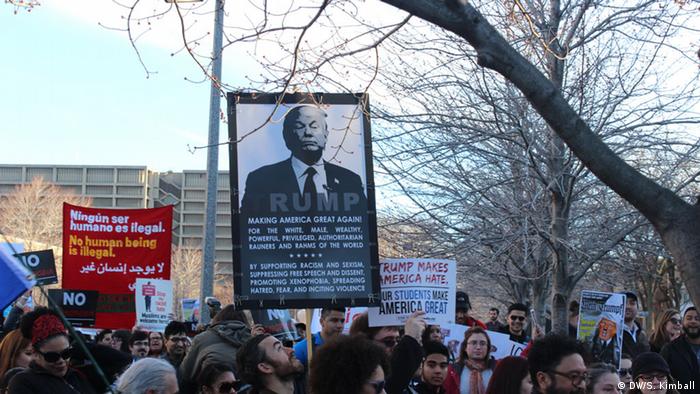 Even for the protesters, the news came as a surprise.

Donald Trump called off his rally in Chicago on Friday, citing "security concerns" amid reports of scuffles inside the university arena where he was scheduled to appear.

"Honestly, I'm shocked they called it off as quickly as they did," said Annelise Steele, a 20-year-old student who showed up to protest against the Republican front-runner.

A large number of anti-Trump demonstrators descended on the University of Illinois Pavilion Center, many carrying signs and chanting slogans that panned the billionaire as a fascist and white supremacist. Activists said thousands had showed up to protest.

"I feel ecstatic. I feel like I actually have a voice," said Uber driver Robert Willard as his fellow protesters celebrated their victory. 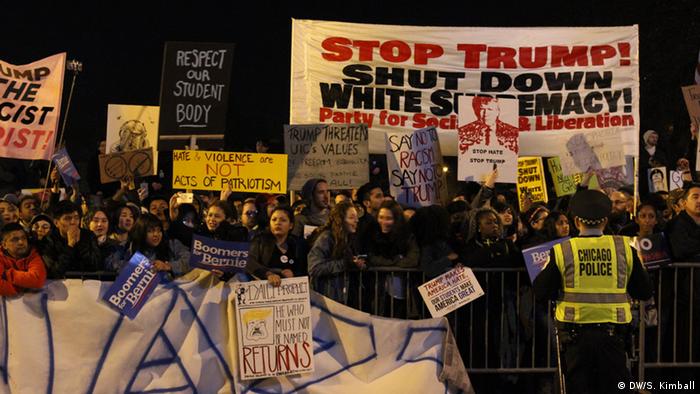 In a press release, Trump's campaign said he decided to "postpone" the rally after landing in Chicago and discussing the situation with law enforcement. Supporters like Tayler Fuentes were disappointed in their candidate for not showing up.

"He should have stuck it out," said Fuentes, a 28-year-old veteran and surgical assistant. "He always projects this image of being strong. What's he going to do when China and Russia come knocking on the door?"

'I would love to see a wall put up'

Hours before the rally was scheduled to begin, the line of Trump supporters already stretched for blocks outside of the arena.

"I feel like he's the only person available that can break up the corruption in the US government," said Tony Smith, a 64-year-old retiree, as he filed toward the entrance gate with other Trump supporters.

Dove Thiselton is still undecided about Trump. She doesn't always agree with his rhetoric, but she does support some of his stances on immigration, like building a wall on the border with Mexico.

"I would love to see a wall put up," said Thiselton, a mother and photographer. "I just moved from California, where there's a real illegal immigration problem. One of the reasons we moved here was the schools being overcrowded."

Cole Beesley, a college student, believes Trump is "the most straightforward candidate."

"He doesn't beat around the bush and cater to everyone's wants and needs," Beesley said. "He says what's on everyone's mind but we're too scared to say." 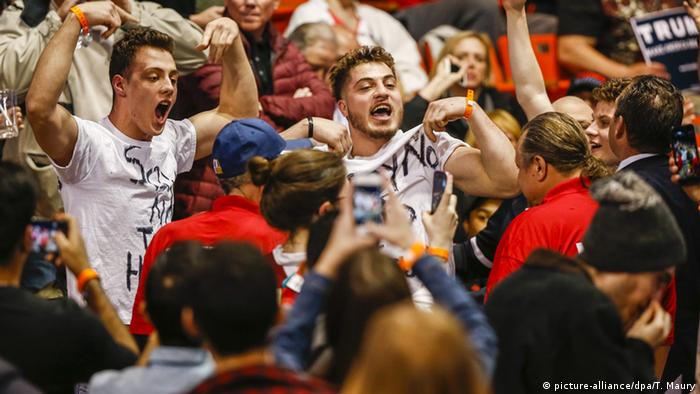 Protestors and supporters physically clashed with one another

"It's neo-fascism and I won't stand for it," said Allen, a 24-year-old protester, who declined to give his last name. "It emboldens people to commit violent acts against people of color, people who identify as alternative sexualities and gender identities," he said.

Arlene Bueno, a 22-year-old who works in retail, is concerned that Trump continues to draw so many supporters.

"Donald Trump is a bigot, and unfortunately many people think he's the person we should turn to," Bueno said. "It's just ignorance and racism. We're all immigrants. The majority of the people who live here, they're all immigrants."

But Trump supporters like Tayler Fuentes bristle at the charge of racism.

"I'm not a white supremacist; don't put that on me because I'm here," Fuentes said.

March to the nomination

Though Trump suffered a defeat at his rally, he's on track to win a string of key primaries on Tuesday.

He has a substantial lead in Illinois and large, delegate-rich states like Ohio and Florida.

"If he wins both Ohio and Florida, I think the coronation is on," said Zachary Cook, a political science professor at DePaul University. "I don't see what realistically stops Trump from getting the nomination."

But Cook believes Trump would face an uphill battle among diverse voters in the general election, having alienated many people of color with his incendiary rhetoric.

"I think you're going to see a real counter-mobilization amongst both African-Americans and Latinos," Cook said.

Trump’s statements too inflammatory, says head of Republicans in Germany

While he does not support Donald Trump’s controversial statements, they shouldn't be taken at face value, says the head of Republicans Overseas Germany. He also thinks that as a nominee Trump would need to change course. (11.03.2016)

While Hitler and Trump have some similarities, the differences are more important, German historian Thomas Weber tells DW. Instead of comparing them, people should focus on the danger Trump poses to the world. (07.03.2016)

Donald Trump's success says a lot about America. Indignation about the political elite is understandable, but it can't explain why aggression breeds success. It's a situation Gero Schließ says could end badly. (05.03.2016)