An explosion and the resulting blaze at a large chemical plant in Germany's Ruhr district has killed one worker, again putting the spotlight on the nation's third-biggest export sector. 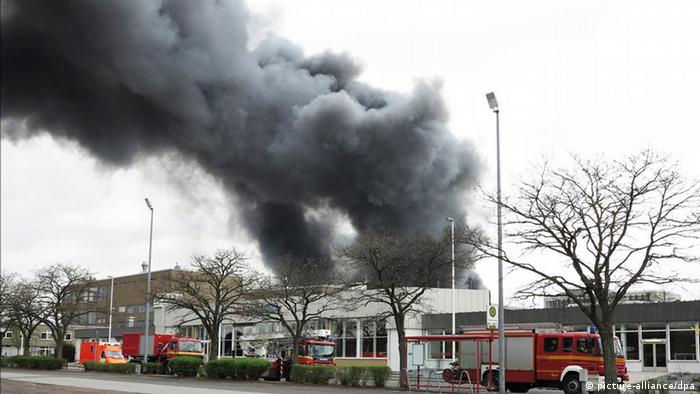 A column of smoke rose 100 meters from a facility run by the chemical concern Evonik Degussa on Saturday next to the town of Marl, prompting officials to warn 87,000 residents to close their windows.

But authorities quickly withdrew that alert, saying prevailing winds had rapidly dispersed the emission. The blaze at the west German town, which lies 40 kilometers from Dortmund, resulted in a large turnout of emergency services.

A spokesman for Marl's chemicals estate, Infracor, said the blast occurred in a tank used by Evonik Degussa to produce CDT. The chemical feedstock is used to manufacture diverse plastics.

Infracor spokesman Klaus-Dieter Juszak said an emergency physician had sighted the dead worker. Residual heat prevented recovery. Firefighters had used foam – not water - and had extinguished the blaze. The cause was unknown.

Police say two other persons were injured, one severely with burns. Police spokesman Michael Franz said "the situation is under control."

Marl has one of Germany's largest chemical complexes. It sprawls over six square kilometers, comprises 100 resource-sharing plants run by 30 firms, and employs 10,000 workers. Its last reported major alert was a gas release in 2006.

One of Europe's most serious chemical alerts happened in 1986 when a fire at a Swiss plant operated at the time by Sandoz resulted in toxic river pollution. That devastated the Rhine downstream and prompted a major debate about chemicals safety.

Early this year there were several accidents with chemicals in Germany itself. On January 17, another major complex in Brühl near Cologne, chlorine gas escaped, injuring several workers. At Dresden's TU technical university 102 students were cleared medically after a teaching-laboratory experiment went wrong.