Charm offensive by ′little green men′ in Ukraine | Europe | News and current affairs from around the continent | DW | 24.04.2014

They laugh, joke and play with children: The heavily armed men in camouflage uniforms without badges are trying to come off not as bandits but as protectors in eastern Ukraine. And it appears to be working. 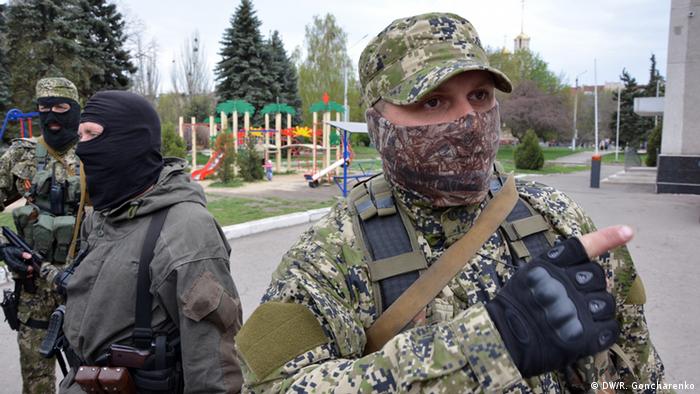 A young mother pushes her two-year-old son in a swing at a brand-new playground. Behind her, men with Kalashnikovs unload rocket-propelled grenades from a car. Birds chirp, church bells ring. "I'm not afraid of these people," said Julia, the young mother. "They're only here to protect us."

What she said she does find disturbing is the Ukrainian Army - the fighter jets and helicopters that fly low over the city. "My son is afraid of them," Julia said. A woman building a sand castle with her granddaughter agreed. The men with Kalashnikovs, however, are "just fine." 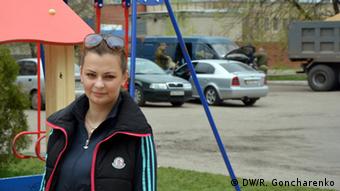 Young mother Julia doesn't see the men as a threat

That's what life is like in the eastern Ukrainian city of Slovyansk, which has been controlled by pro-Russian separatists since the beginning of April. Separatists in Slovyansk and other eastern Ukrainian cities have declared a "people's republic" and want to hold a referendum at the start of May to vote on measures calling for more autonomy within Ukraine or even possible annexation by Russia. The government in Kyiv, of course, would like to prevent that from happening.

The men wear camouflage uniforms without identification and hide their faces behind balaclavas. Who they are, and how many, remains unclear. Since Russian annexation of Crimea, they're being called the "little green men."

Russian President Vladimir Putin only later clarified that the men in green uniforms without badges were in fact Russian soldiers. Another of their nicknames is "the nice people," because they appear so friendly.

In Slovyansk, some of the armed separatists appear to be Ukrainians, others Russians. "We're former military," one of them said, apparently a commander. He speaks Russian like a Russian, not like a Ukrainian.

His colleague also seems to be Russian, based on his accent. The Ukrainian regime in Kyiv claims that Russian special forces are operating in the eastern part of the country. It's a statement Moscow has denied. 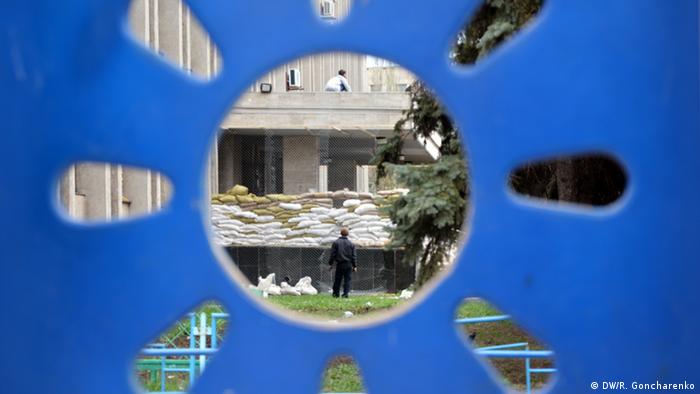 One soldier said he's become a favorite at the local playground

The heavily armed men make an effort among citizens to come across not as bandits, but rather as protectors. "We'll stay here as long as necessary to protect civilians," one man said.

He joked with passers-by in a friendly manner, allowed himself to be photographed and gladly showed his weapons. "I've since made friends with the children," another man said, laughing. "When I go to the sandbox, they recognize me and run up to me."

Is this also the sort of separatist that the Ukrainian government is aiming its "anti-terrorism" operation toward? There are some indications that a friendly demeanor toward local populations is a deliberate tactic of pro-Russian separatists.

If that were the case, it would exactly carry out the image that Russia's President Vladimir Putin sketched at his press conference in Moscow on Ukraine at the beginning of March. Russia would only send troops to Ukraine "to protect Ukrainian citizens."

"Let's see those troops try to shoot their own people, with us behind them," Putin said. "Let them just try to shoot at women and children." 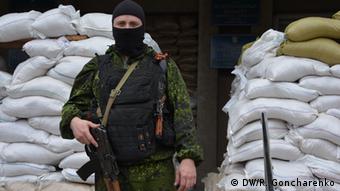 Soldiers are in Ukraine to protect Ukrainians from Ukrainians, Putin said

The implications of this could be observed shortly before Easter. Near the eastern Ukrainian city of Kramatorsk, civilians - including a number of women - halted a colonnade of Ukrainian army, disarming them. Separatists were able to make off with six tanks and numerous firearms.

"This Kalashnikov with the rocket-propelled grenade that I'm holding now formerly belonged to a Ukrainian paratrooper," said one of the men in front of the occupied administrative building in Slovyansk.

It's also been reported from other cities in eastern Ukraine that some civilians have joined forces with separatists, although apparently only a minority. According to the most recent polls, at least 20 percent of the population in the Donetsk and Luhansk regions would welcome the Russians if they were to come marching in.

But most of the population, the polls showed, appears to be staying passive - hardly anyone is taking to the streets. "We're afraid," said a young man who works at a gas station near Slovyansk. Because despite the kind demeanor of the "little green men," criticism could mean risking one's life.

A war zone without frontlines

The trip from Donetsk to Sloviansk in eastern Ukraine is like a journey into a different country. The further one travels, the more apparent this becomes. DW's Roman Goncharenko describes a warzone without frontlines. (20.04.2014)