True to its below-the-belt reputation, "Charlie Hebdo" debuted in Germany with jabs at Angela Merkel. It advertised the launch with a poster of the chancellor on a toilet. Will French satire strike Germany's funny bone? 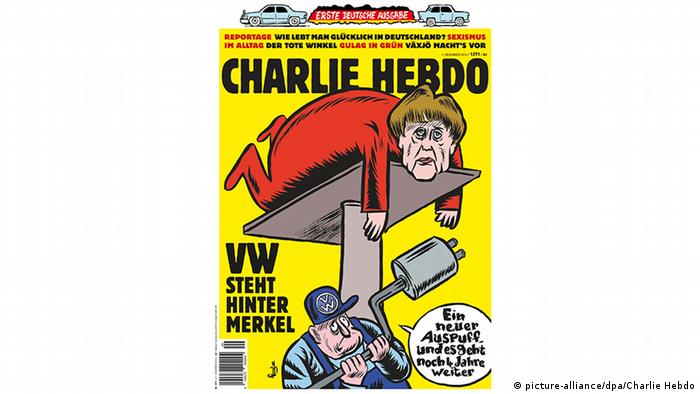 The cover alludes to the Volkswagen emissions scandal and features Chancellor Angela Merkel lying atop a hydraulic ramp. A mechanic says in a cartoon speech bubble: "With a new exhaust, she'll be good to go for another four years."

Ahead of Thursday's launch, "Charlie Hebdo" posters circulated, featuring the chancellor sitting on a porcelain toilet with the words, "Charlie Hebdo - it's liberating."

The first four pages of the publication, which is a mix of cartoons and short articles, are a kind of pictorial travel report by illustrator Laurent Sourisseau, who goes by his artist's name, Riss. He touches on hot-button social issues in Germany such as national identity and the refugee crisis. 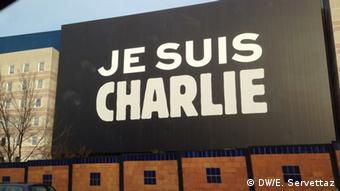 Riss, who was injured in the January 2015 attack on the "Charlie Hebdo" editorial office, says the satire magazine has potential for success in Germany.

"Humor is everywhere in Germany," Riss told German public broadcaster ARD. "It's an experiment for us to publish 'Charlie Hebdo' in another language and try to find new fans for the magazine who can help defend it."

Martin Sonneborn, former head of German satire magazine "Titanic" and a European parliamentarian representing "Die Partei," told DW that "Charlie Hebdo" is "still living off of the attacks." He remains skeptical about its potential abroad.

"I don't believe that magazine will go over well in Germany, because it has such a specifically French aspect and represents a very unique type of humor," he said.

Due to the January 7, 2015 terror attack, "Charlie Hebdo" has been produced in a secret location in France. While the magazine drew worldwide attention and spurred the #jesuisCharlie social media movement, it has also sparked criticism for its no-holds-barred satire.

In January, it provoked ire for a cartoon featuring drowned Syrian migrant Aylan Kurdi, the deceased toddler whose photo became a symbol of Europe's refugee crisis. The image showed a bug-eyed grown-up Kurdi, running after a screaming woman trying to escape him. "What would have become of little Aylan if he had survived? A groper in Germany," the text read, in reference to the New Year's Eve mass sexual assaults in Cologne.

The magazine was also sued in September for mocking the victims of the earthquake in Amatrice, Italy, depicting them as varieties of pasta.

For now, the magazine is translated from French to German, but editors plan to get German satirists on board in the future and create original German content as well.

The German version is edited by a 33-year-old from Berlin who uses the pseudonym Minka Schneider and has lived in Paris for nine years.

Schneider told German news agency dpa that the German edition would aim to stay true to its French parent. She was critical of German satirists, saying they are sometimes too reserved. "In some cases they say, you can't do that or that's not OK at all."

Sonneborn, on the other hand, opined that German humor is often underestimated. "We are much further advanced in our humor than we believe," he told DW.

However, whether Germany's sense of humor will result in "Charlie Hebdo" sales remains to be seen.