German Chancellor Angela Merkel has asked Nobel laureate economists why their discipline got so much so wrong in recent years. And she challenged them to come up with new measures of wellbeing. 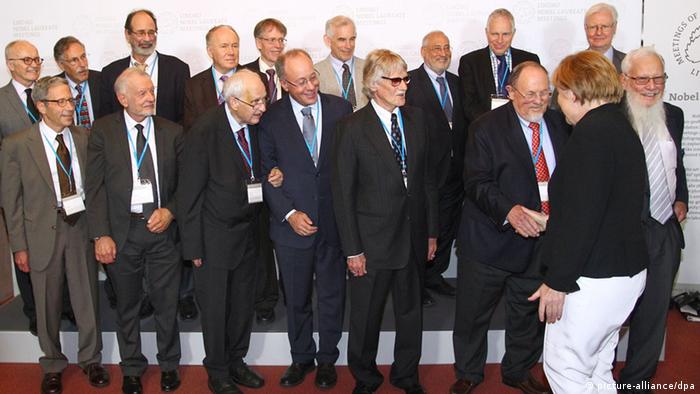 For the fifth time, winners of the Nobel Prize in Economics have come together to discuss current issues in their field. The conference is held every three years in Lindau, a small, scenic town on the shores of Lake Constance near the Austrian and Swiss borders. This year, the meeting included more than 400 young economists and a special guest - German Chancellor Angela Merkel.

Critics of European economic policy were also in evidence.

"Austerity blasts Europe", "Economic growth versus sustainability", "Is ethical thinking foreign to economics?" - provocative placards in garish colors were hung along the streets leading to the convention center. Representatives of NGOs like Attac, which is critical of economic globalization, have been holding demonstrations in Lindau. Many are dissatisfied with the policy prescriptions of leading mainstream economists. They see them as responsible for out-of-control financial markets and high unemployment.

Whom does economics serve?

The Nobelists come to Lindau to talk about the state of academic economics and about the state of the global economy itself. There is no fixed theme - topics can be freely chosen. But a question that is always in the background is: How useful is economics? 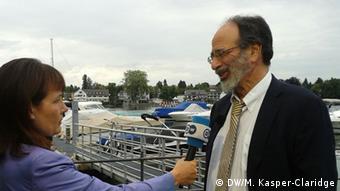 This year, 18 Nobelists came to the conference - all of them past winners of what is formally called the Sveriges Riksbank Prize in Economic Sciences in Memory of Alfred Nobel, established in 1968 by the Swedish central bank.

Here, they're meeting young economists from 80 countries who are looking to learn from them - including Kareem Immail, a young Egyptian economist who works at the International Monetary Fund. He said he has been following the discussions at the conference with interest, but there are "more questions than answers" on offer.

The German Chancellor is looking for a dialogue

There were more journalists accredited for this year's meeting than for any of the previous ones, and the tone of dispute and controversy has rarely been so marked.

This year's meeting was also the first which Chancellor Angela Merkel attended. She had questions as well:

"Why were the economic sciences in the past several years of crisis so badly off the mark in terms of predicting or describing economic reality? Were the underlying economic theories wrong, or were we listening to the wrong people?" she asked the meeting's Nobelists and young researchers.

Politics has to be able to do more

Angela Merkel noted that she was herself trained as an academic scientist - she has a doctorate in physical chemistry. She knows, she said, that there are no perfect answers. Especially not in politics, which has to focus on the interests of the citizenry, rather than on economic theories. She said that "Homo economicus" could not consist simply of economic expertise, and made a pitch for her political approach. 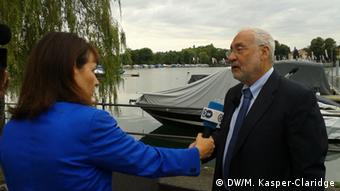 Joseph Stiglitz published the book 'The Price of Inequality' in 2012

"For us, it's about understanding the expectations and ideas of the citizens about what a good life is," she said. That's what her priority is, and she wants economists to address this as well. She wants new economic welfare indicators developed that are different from traditional measures like gross domestic product (GDP) or unemployment rates.

A rebel from Indiana

Among those listening to the discussion with satisfaction was Joseph Stiglitz, a Nobelist who was chief economist of the World Bank from 1997-2000. He's one of the few prominent economists who is not considered to be conservative. He has been called "the rebel from Indiana," in part because he questions whether markets are always efficient. In an interview with Deutsche Welle, Stiglitz said that his analyses have nearly become mainstream.

A topic that has consistently preoccupied him is the widening divide between the rich and the poor.

"For almost fifty years, nobody talked about inequality. Now there's a broad consensus, even among economists, and certainly among our society, that inequality is an important issue," he said, and cited figures from the US. 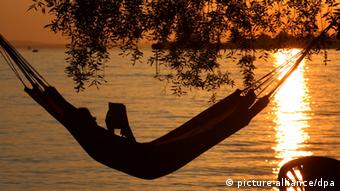 "95 percent of the income gains earned nationally during the past several years in America went to the top 1 percent. Median incomes, adjusted for inflation, are lower than they were 25 years ago."

Stiglitz noted that in the US, it really is the case that the rich are getting ever richer, and the poor poorer. In his view, that will have enormous economic consequences. One key factor is that not enough was being invested in the education and training of the broad population. The American Dream - an iconic story of starting as a dishwasher and rising to the status of a millionaire through hard work - has long since become an almost unattainable myth.

A Europe for the rich

Asked about his views on Europe's economy, Stiglitz admitted that income distributions are less unequal there than in the US. In Germany or Scandinavia, there is a strong middle-income class. But in Europe, too, the incomes of the wealthy have risen disproportionately to those of the rest of the population.

Alvin Roth, another professor of economics and Nobelist, told DW that he can understand the intensity of the discussion about social inequality. He said rising unemployment among the young was especially troubling.

At the same time, he asked non-economists to understand that economists don't always have solutions to economic or social problems.