Wolfsburg seal a 2-0 win against CSKA Moscow thanks to a brace from Andre Schürrle. CSKA were perhaps unlucky not to come away with more from the game, but the three points leaves Wolfsburg well-placed. 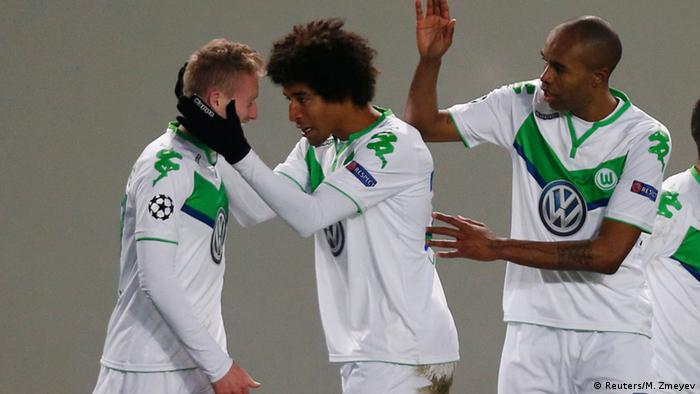 It took a brace from an unlikely source to leave Wolfsburg needing just a point at home against Manchester United in their final group-stage game in order reach the Champions League knockout rounds. Igor Akinfeev's error allowed Andre Schürrle a first, before a well-taken second late on means Wolfsburg will at least be playing Europa League football come 2016.

For the first 45 minutes, it looked as though the cold had got to a Wolfsburg side that battered Werder Bremen 6-0 on the weekend. Even though Julian Draxler dropped out due to injury, Wolfsburg kept their width early on. The problem was it - and the 60 percent possession they enjoyed - didn't amount to much. When both teams picked up the pace, their attacks improved. Marcel Schäfer's low cross was flicked back by Bas Dost and Max Kruse's rasping drive forced a good save out of Akinfeev. CSKA nearly had Ahmed Musa to thank after a quick burst in attack, but his shot hit the side netting.

With Wolfsburg caught between cold temperature and cold feet, the hosts looked like they would take advantage. Diego Benaglio and some poor decisions from CSKA kept the score goalless though. Just after the hour mark, Andre Schürrle was introduced and seven minutes later, the World Cup winner was on the scoresheet. The winger's shot from a tight angle squeezed under Igor Akinfeev to put Wolfsburg ahead (likely the goal will eventually go down as an own goal).

Moments before, Zoran Tosic curled a beauty onto the post as CSKA desperately sought a goal. The game opened up in the final passage, but it wasn't until two minutes from time that Wolfsburg doubled their lead after substitute Sebastian Jung set up Schürrle for a well-placed finish. After a season of indifference, it was fitting that the 25-year-old was the difference on a night when Wolfsburg badly needed some quality.

Bayern advance to round of 16

Bayern Munich have clinched a berth in the Champions League round of 16, beating Greek side Olympiacos 4-0. The Germans dominated the match from start to finish - despite being down to 10 men for most of the second half. (24.11.2015)

Bayer Leverkusen have fought to a 1-1 draw in Belarus to keep alive their slim hopes of advancing to the round of 16. It was a scrappy contest that featured a couple of strange goals. (24.11.2015)