Basic errors, bad defending and a brace from Robert Lewandowski, so far, so familiar. The cracks in Bayern Munich were evident in a wild 3-3 draw that ensures top spot but it's clear the Pole still carries their hopes. 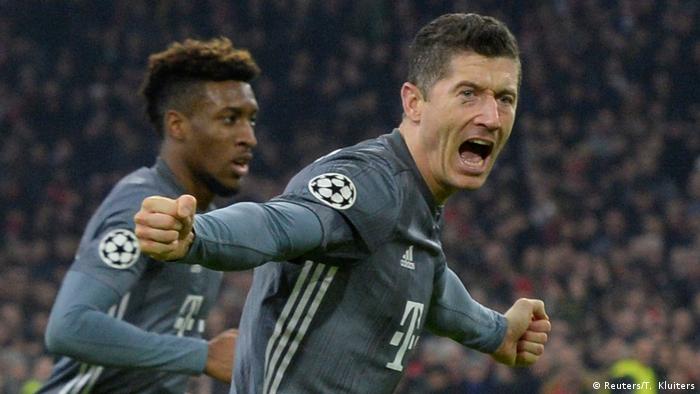 The 3-3 draw in Amsterdam that keeps Bayern top of group E was not short of a talking point. Thomas Müller planting his studs in Nicolas Tagliafico's head, Jerome Boateng lunging in unneccesarily to concede a penalty again, Andre Onana's wonder save, Kingsley Coman's brilliant comeback strike, or any of the four goals scored after the 81st minute.

A fair way down that list comes another Robert Lewandowski brace, his sixth of a campaign where he has scored more goals in all competitions than any other player in Europe's big five leagues (21) and more goals than anyone in the Champions League (8).

That scoring a double away from home feels so routine is testament to the levels of consistency and efficiency the Polish striker displays.

In an open first 13 minutes, he'd barely touched the ball. Then, all of a sudden, the former Borussia Dortmund man spotted a defender deeper than his teammates, curved his run, controlled a perceptive Serge Gnabry pass and hammered home with minimal fuss. Those two touches were just his third and fourth of the game.

There was a time, not so long ago, when that would've been the beginning of the end for Bayern's opponents but, despite a decent run of late, it just isn't true of Niko Kovac's side anymore.

Ajax were vibrant, if defensively naive, throughout and their first equalizer just after the hour mark was superbly worked. Even so, Niklas Süle seemed more concerned with holding his arms behind his back to prevent handball than blocking the low cross from which Dusan Tadic tapped in.

Then Boateng had an even bigger brain fade, and one even less excusable given his immense experience. He'd already got away with a lunge in the first half but, just as in Bayern's first loss of the season at Hertha Berlin, he committed to a tackle he had no chance of winning after realizing he was outpaced. It's a familiar feeling for Bayern these days.

Less familiar is the sight of Müller getting sent off. His flying kick on Tagliafico was not malicious but it was stupid, particularly given that Ajax had just been reduced to 10 men themselves. It seems Kovac's senior men can still find ways to surprise him.

But in Lewandowski he has one of the most reliable goalscorers around. While he tucked away his 87th minute penalty nervelessly and played a part in Coman's goal to put Bayern 3-2 up, the 29-year-old did spurn one good chance in the first half and was denied a hat-trick by Onana's excellence.

But no striker scores every chance they have, and Lewandowski takes far more than most. He has had some difficult moments for Bayern, not least in the semifinals of this competition last year, when he couldn't find a way through against Real Madrid, but he carries a heavy goalscoring burden. 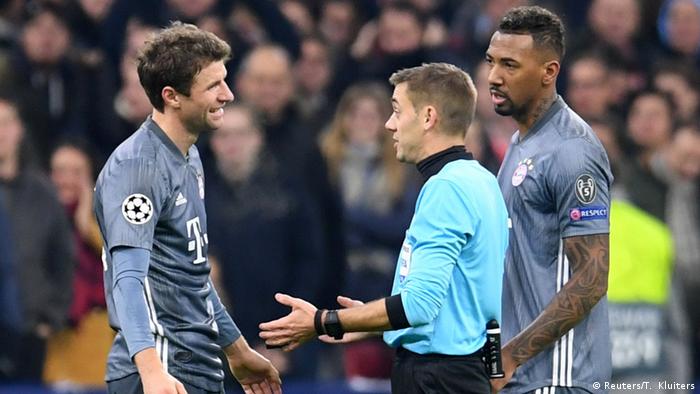 Thomas Müller remonstrates with the referee after his red card

With Arjen Robben injured and off in the summer, Thomas Müller's goalscoring in decline, and neither Serge Gnabry or Kingsley Coman yet truly prolific, the 29-year-old frontman is by far and away Bayern's sharpest threat; he's scored over half their goals in Europe and a third of their Bundesliga tally this term.

Lewandowski remains well on course for a fourth successive haul of over 40 goals in all competitions, a phenomenal achievement. His last 147 games for Bayern have bought 128 goals.

That none of this is particularly surprising tells its own story, while the fact that those 147 games have come in the last three seasons is evidence both of his robustness and the degree to which he's truly irreplaceable in this Bayern team.

Increasingly Lewandowski is becoming one of only three man of whom that can be said, Joshua Kimmich and David Alaba the others. Robben, Ribery, Müller, Boateng and the rest of the over 30s are all creaking to some degree, whereas Süle, Gnabry and Leon Goretzka still have work to do. Manuel Neuer is beginning to live, at least partly, on reputation.

Kovac said this week that he wants to put a stop to rotation. But does that mean underperformers won't be dropped? The Croatian would, of course, say no. But at least he has one area of the pitch where he need not even contemplate such action.

As the final matchday of the 2018-19 Champions League group stage approaches, less than half of the groups have any genuine tension. With top-seeded teams almost guaranteed progress, is it time for an overhaul? (11.12.2018)

While Bayern and Robert Lewandowski continue their revival, Dortmund are finding goals from all over. Nils Petersen was also on the scoresheet to complete a remarkable record while a new American made a fast start. (09.12.2018)