Jürgen Klopp has guided Liverpool to their first Champions League final since 2007 after a 7-6 aggregate victory over Roma. They will meet Real Madrid on May 26 as the English side look to claim their sixth European Cup. 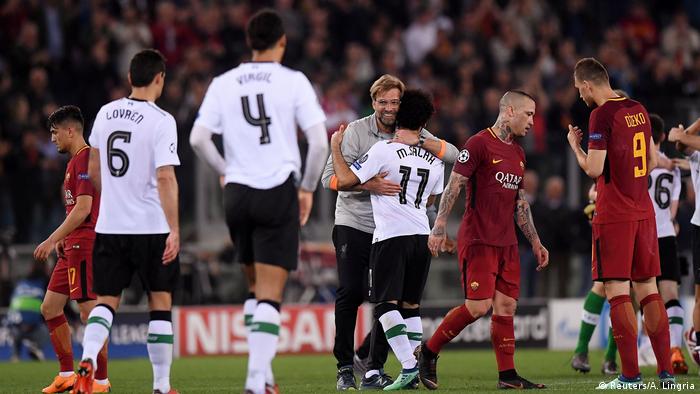 Liverpool will face Real Madrid in the Champions League final after surviving a late Roma flurry to complete a 7-6 two-legged victory in the Italian capital.

Liverpool, who have happy memories of the Stadio Olimpico having won their fourth European Cup at the stadium against Roma in 1984, brought a commanding 5-2 lead to Rome after a breathless display of attacking football at Anfield. But there was waryness of what Roma were capable of after they had recovered from a three-goal first leg deficit to knock out Barcelona in the previous round.

Liverpool eased any concerns of a Roma fightback with the opening strike, which came courtesy of Sadio Mane's crisp finish after Radja Nainggolan had gifted possession to Roberto Firmino, who duly chalked up his seventh assist in the Champions League this season.

But Roma drew level soon after with a calamitous own goal from James Milner, after Dejan Lovren had thumped the ball into the side of Milner's head, only for it to ricochet straight past Loris Karius and into the Liverpool goal.

The Italians, who were ripped to shreds in the first leg, were better organized this time around but still looked vulnerable when Liverpool attacked. The Premier League side put their noses in front again in the 25th minute, when Georginio Wijnaldum nodded in Liverpool's second after Roma failed to clear a corner and Edin Dzeko inadvertently headed the ball straight to the Dutchman.

Roma leveled soon after half time through Dzeko, who atoned with a clinical finish after Karius had parried Stephan El Shaarawy's effort from distance. Roma toiled for a third and it eventually came courtesy of Nainggolan, whose sensational low drive went in off the post.

Nainggolan made it 4-2 on the night with a stoppage time penalty after substitute Ragnar Klavan handled in the box. But it was too little too late for Roma, who ultimately paid the price for their abject first leg display.

Liverpool coach Jürgen Klopp, who oversaw Borussia Dortmund's run to the final in 2013, has already guided the Reds to one European final — the 2016 Europa League final — and will be hoping both he and his club can go one step further in Kyiv later this month.