In Borussia Dortmund's first game of the 2021/22 Champions League season, 18-year-old Jude Bellingham led the Bundesliga side to victory. Whether Dortmund can build off this win though, remains as unclear as ever. 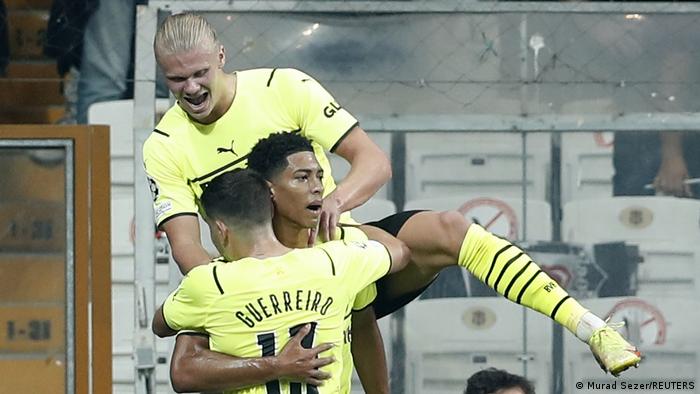 It's tempting to say that Borussia Dortmund's away win in Turkey to start their new Champions League season was a sign of a side maturing. Marco Rose's team, dealt with an intimidatingly loud atmosphere, reveled in the increasing completeness of Jude Bellingham, and just about did the professional job expected of them.

On the other hand, this is still Dortmund, a team perpetually caught between an exciting future and a competitive present. The moment they look unstoppable, they wobble. The moment a player excels, talk of departure begins.

Erling Haaland can't score without any mention of which Premier League team he'll be playing for next, and after tonight the same will be true for Bellingham.

The English midfielder spent most of Wednesday night demonstrating how he has added more attacking threat to his play. When the 18-year-old controlled the ball on his chest while moving into the box and then fired the ball through the legs of the goalkeeper it felt like a defining moment in his career. The breakout goal on a European night.

The truth though, was that this entire performance was a demonstration of ability from Bellingham. Even if Dortmund hadn't been wearing neon yellow, it would have been impossible not to notice him.

"The only thing I want to do is help Borussia Dortmund win football matches," he said afterwards, and that much was clear.

After setting up Haaland for Dortmund's second just before the break, Bellingham showed no sign of letting up. On the hour mark, he glided through the Besiktas midfield with light feet before spreading the ball wide. The attack came to nothing but everyone had seen Bellingham's agile movement. Six minutes later, he did the same in the box but was denied by Destanoglu Ersin.

"He's three years younger than me. He's amazing," Haaland said afterwards, smiling broadly when Bellingham sneaked in mid-interview to kiss the Norwegian on the cheek.

But can the same be said of Dortmund? A solid away win with noticeable individual performances (goalkeeper Gregor Kobel was brilliant again) made for the perfect start to a Champions League campaign that once again promises much.

But to believe that would be to forget what sort of side Borussia Dortmund really are, and anything could happen when they host Union Berlin in the Bundesliga on Sunday.

As for Bellingham's future, the forecast is a lot clearer. The Englishman looks set to go from strength to strength, honing his skills and working on his weaknesses at a club which gives youth a chance. Then, like so many before him, he will leave, and Dortmund will have to start again.