Bayern Munich's defense of the Champions League is in jeopardy after defeat by Paris Saint-Germain in Munich. Kylian Mbappe scored twice to settle a vibrant contest in the snow, as Bayern missed their key attackers. 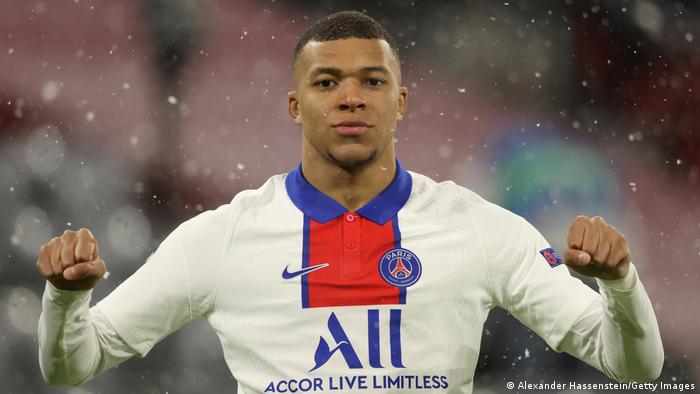 Revenge is a dish best served cold and for PSG, there was a sweetness to this extraordinary first leg victory over Bayern Munich, the team who denied the French champions last season in the warmer climes of Lisbon.

The first half was a magnificent spectacle of football. Freeflowing, open and everything that August's Champions League final wasn't. But PSG are under new management, and Mauricio Pochettino's team ditched the pragmatism for a brand of high-octane football that Bayern simply couldn't live with in the first half. Bayern usually relish open contests of this nature, but things are different without Robert Lewandowski.

Kylian Mbappe was once again the star performer on his return to Germany. The Frenchman set PSG on the path of victory in the third minute, forcing the ball in from close range after Manuel Neuer allowed a well-greased ball to squirm under his body — and it was this ruthlessness in front of goal that the French World Cup winner considered the deciding factor.

"It was efficiency in front of goal that tipped the scales," Mbappe said. By the same token, Bayern's Thomas Müller looked back with regret given the number of chances Bayern spurned, particularly in the second half.

"We have to score more goals," he said in a frank post-match assessment. "We can talk about goals conceded, but if this finishes 5-3, 6-3 then no one could complain. If we had the killer instinct today, that we have often shown, then you would have seen another game."

By the time PSG captain Marquinhos had beaten Bayern's high line and tucked in another, Bayern were on the ropes. 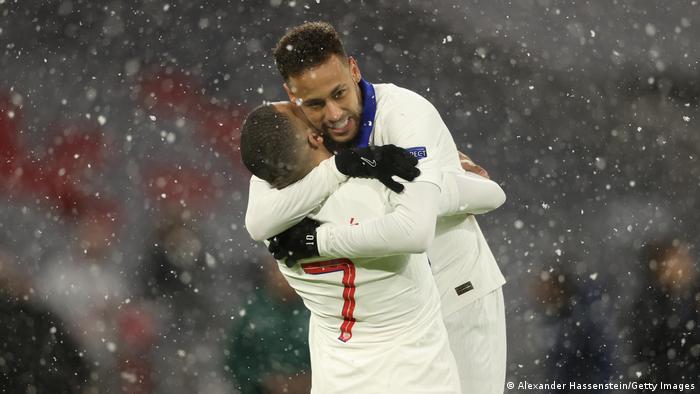 Neymar and Mbappe were on song for PSG, who hold the advantage over Bayern.

With Lewandowski out of both legs through injury and Serge Gnabry withdrawn from the squad on Tuesday following a positive COVID-19 test, much of the pre-match talk was about how blunted Bayern's attack would be. The early signs weren't good. Bayern had shown flashes of their quality, but struggled to rise to challenge without their two key goal threats.

But Bayern's weakness became less of a factor when PSG captain and chief organizer at the back, Marquinhos, limped off after injuring himself in the process of scoring PSG's second. That opened the door for Bayern to exploit PSG's newfound weakness, and Eric-Maxim Choupo-Moting did just that, glancing in a fine header from Benjamin Pavard's cross.

Hanso Flick had already lost Leon Goretzka and Niklas Süle to injury as the conditions took its toll for everyone, but Bayern found a balance after the reshuffle. PSG reverted to a counter-attack strategy and invited Bayern onto them, and eventually Bayern forced their way through, with Thomas Müller rising high to meet Joshua Kimmich's free-kick and guide in the equalizer in front of the watching Joachim Löw. 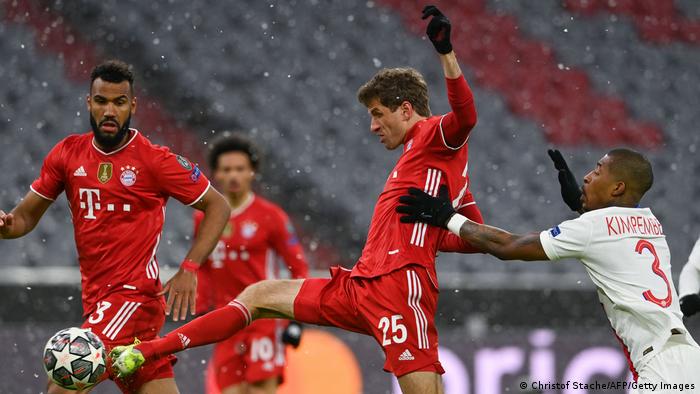 Thomas Müller helped drag Bayern back into the contest with Bayern's second.

As this helter-skelter contest ebbed one way and then the other, Neuer kept Bayern in it with a couple of key saves, just as Keylor Navas did at the other end. But on a night of Champions League football at its best, PSG and Mbappe had the last laugh. With Bayern slightly over-committed, the French champions broke at speed, Angel di Maria sliced a throughball to Mbappe, who drilled the ball through Boateng's legs and past Neuer.

Bayern will need to score twice without reply in Paris next week to go through and the serial German winners have proven that they can score without Lewandowski. The question is, can they do it and keep PSG at bay? The jury is out, but after this superb spectacle of football, anything is possible.