Bayern Munich returned to form in sensational fashion, securing a huge win over Lazio in Italy that effectively sealed their spot in the knockout rounds. Jamal Musiala impressed in place of the absent Thomas Müller. 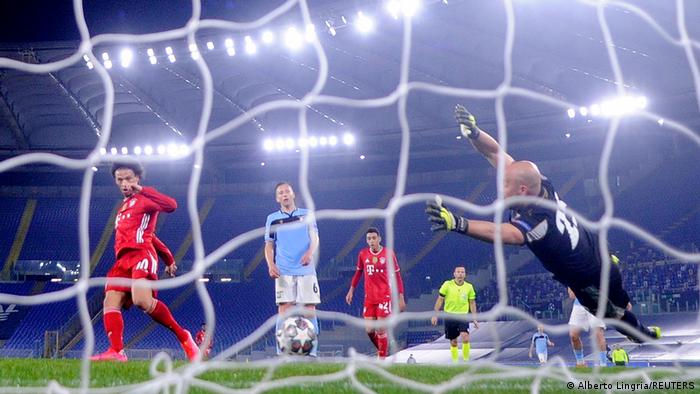 It turns out all Bayern Munich needed was to get back to playing Champions League football.

In Rome, Bayern swapped exhaustion for exhilaration as they danced their way past Lazio virtually all the way into the quarterfinals. The contest was over after 42 minutes, the tie by the end of the 90.

"We were good from the start, unlike in recent games where we were asleep for the first 25 minutes," Leon Goretzka told "Sky" afterwards. "We were aggressive, won balls high up the pitch."

This was a night when Bayern were not saved or separated by individual moments, but rather had individuals stand out in a sensational collective display. Bayern were hungry, snapping at loose balls, chasing down errant passes. Hansi Flick's side looked in the mood. They looked like the team that tore Europe apart on their way to the title last season.

For all the fury of Bayern's sensational first-half, they were set on their way by a gift from defender Mateo Musacchio, who invited Robert Lewandowski to the opener — goal 32 in all competitions this season. 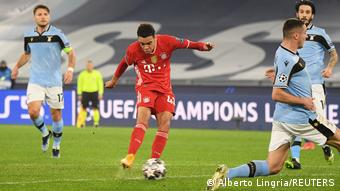 Jamal Musiala resoundingly answered the question as to whether he could fill the Thomas Müller role. His well-taken, low strike just as the hosts dared to make a game of it was the crowning moment of a mature performance from the 17-year-old.

"I think he was delighted to start today and we told him to play freely because that is what makes him so good," Goretzka said. "Jo [Joshua Kimmich] and I tried to make his life easier by supporting him from deeper in midfield."

Niklas Süle looked comfortable and confident at right back, Leroy Sané had perhaps his best game in a Bayern shirt and even Manuel Neuer had the chance to remind Europe he's still the best keeper out there.

After weeks of slowly looking for the kill, Bayern went for the jugular early and repeatedly. Just a minute after halftime, Francesco Acerbi felt the individual pain of converting the ball into his own net after Sané had embarrassed Lazio's defense.

The Serie A side were drained. Passes were wayward. Even when Bayern took their foot off the gas, Lazio couldn't change the momentum of the game. They were left feeding off the scraps of a consolation goal, Manuel Lazzari making Alphonso Davies look slow and a penalty decision that didn't go their way. They did not look like a team that hadn't lost in Europe this season and were coming off seven straight league wins at home. Lazio hadn't just hosted Bayern, they had invited them in and let them make themselves at home.

"Champions League is something special, especially for our players. Everyone recognized we were all capable and ready to deliver a special performance," Hansi Flick said afterwards.

A lot has to happen for Bayern not to win the league again this season, but tonight they reminded everyone why they're capable of defending both the Bundesliga and Champions League title.