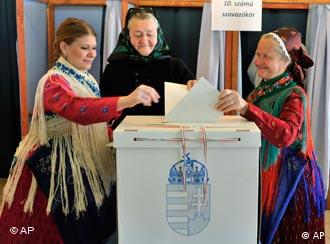 With nearly all votes counted Hungary's center-right opposition party, Fidesz, has secured 206 of the 386 parliamentary seats. The ruling Socialists, headed by Prime Minister Gordon Bajnai, came a distant second, marginally ahead of the far-right Jobbik party.

The National Election Committee said the ruling Socialists gained 28 seats, ahead of the far-right Jobbik party which had 26 seats in the first round. The green liberal LMP party is currently fourth with five seats.

A second round of voting, scheduled for April 25, will decide whether Fidesz has won the two-thirds majority required to push through major reforms without opposition support. 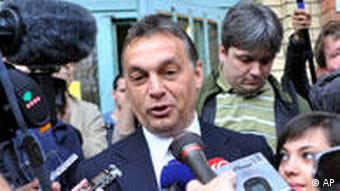 "I feel it with all my nerves and know it deep in my heart that I face the biggest task of my life. I will need all the Hungarian people to solve that," said Orban.

"On this splendid day Hungarians have expressed that Hungary is united, Hungary has power, is able to do great things. It wants jobs, order and safety - Hungarians have shown to the world that it's good to be Hungarian again," he told 2,000 cheering supporters in central Budapest.

Fidesz campaigned on cutting taxes, creating a million jobs over the next 10 years and supporting local businesses to boost to Hungary's ailing economy.

Austerity measures by the ruling Socialist party, along with an unemployment rate of over 11 percent, had seriously damaged the Socialist government's popularity.

Hungary votes on Sunday in an election in which the governing Socialists are set to suffer a major defeat at the hands of the center-right. The far-right Jobbik party could come in second place. (11.04.2010)

Polls predict a swing to the right in weekend Hungarian elections

Hungary's independent technocrat prime minister, Gordon Bajnai, faces defeat at elections on Sunday with polls predicting that the ruling Socialists will be swept aside by the center right opposition Fidesz. (09.04.2010)

Hungary feels torn about its achievements since 1989

Twenty years ago, Hungary was one of the front-runners in eastern Europe setting the pace for change. But despite the fall of the communist party, free elections and foreign investment, not all dreams have come true. (09.12.2009)