Preliminary results of Latvia's election point to a win by the governing center-right coalition. A pro-Russian opposition party scored strongly in a poll dominated by relations with neighboring Russia. 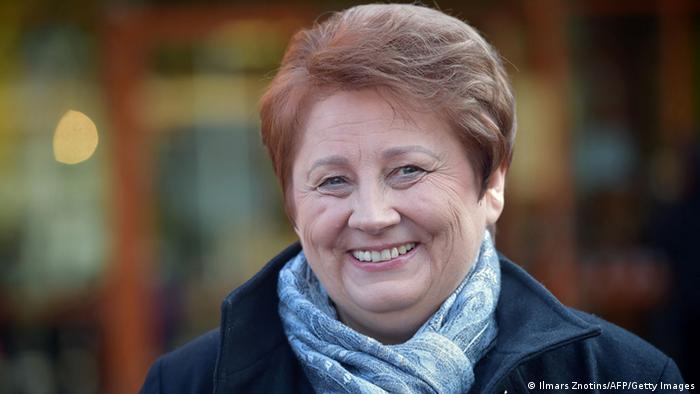 Latvian Prime Minister Laimdota Straujuma's three-party coalition looked set on Sunday to be returned as the Baltic nation's next government.

Her Unity party, the Union of Greens and Farmers and the National Alliance had about 58 percent of the ballot, Latvia's election commission said after the counting of 95 percent of the vote. That would amount to about 61 seats for Straujuma (pictured).

The pro-Russian opposition party Harmony had about 25 seats in the 100-seat assembly. Harmony got 23 percent - mainly from supporters among Latvia's Russian minority.

Russia's stance during this year's conflict in Ukraine had reawakened debate during pre-election campaigning about the intentions of Latvia's large eastern neighbor.

The governing coalition headed by Straujuma had been one of the most outspoken supporters of EU sanctions recently imposed on Russia.

Riga's mayor and Harmony leader Nils Usakov had called on Latvia to have pragmatic ties "with all its neighboring countries."

The newly founded left For Latvia from the Heart party also entered parliament. It scored 6.9 percent of the vote.

The commission said voter turnout was 59 percent. The election was contested by 13 parties and coalitions.

Fears of the Russian bear recalled to life

Eastern European states are expressing concern about the West's Russia stance, calling it indecisive and docile. In Poland, Romania and Bulgaria, dormant fears of past aggression are being reawakened. (10.09.2014)