A center-left coalition is set to take power from Croatia’s conservatives, as voters punish the ruling party over perceived corruption. Meanwhile, voters in neighboring Slovenia delivered a shock for the status-quo. 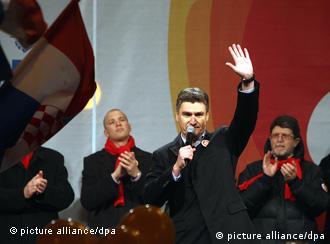 Milanovic promised voters he would meet his responsibilities

A center-left coalition appeared set to take power from Croatia's ruling conservative party, with more than 70 percent of votes counted early on Monday.

Partial results announced by the electoral commission indicated that the "Kukuriku" coalition - led by the Social Democrat SDP would hold a majority of 78 seats in the 151-member parliament.

"We will not let you down, I promise that," said Milanovic, who is likely to be the country's next prime minister. 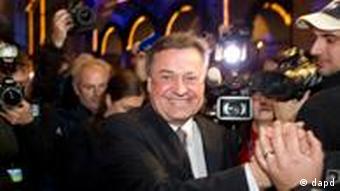 Current prime minister and HDZ leader, Jadranka Kosor, conceded defeat but claimed the result was "good under the circumstances."

In neighboring Slovenia, where parliamentary elections were also held on Sunday, there was a surprise victory for the center-left Positive Slovenia party.

The party is headed by Zoran Jankovic - current mayor of the capital city, Ljubljana, and former manager of the country's largest food retailer, Mercator. Founded only seven weeks ahead of the vote, Positive Slovenia took 28.5 percent of the vote and was expected to pick up 28 seats in the 90-seat parliament.

"The results show that Slovenia will go in the right direction," said Jankovic, whose party will need to rule as part of a coalition. "It is obvious that the citizens want an efficient state."

The conservative Slovene Democratic Party, who had been expected to win the election, trailed with 26.3 percent.

Meanwhile, the center-left Social Democrats of outgoing Prime Minister Borut Pahor - who was forced to call an early election due to resistance to a tough austerity package - won only 10.5 per cent of votes compared with 30.5 in the last elections in 2008.

Slovenia became a member of the EU in 2004, with Croatia set to become the second former Yugoslav republic to join in mid-2013.

Headed for the EU, Croatia marks 20 years of independence

Croatia marks two decades of independence, just a day after European Union leaders confirmed that the country was ready to conclude talks on becoming the 28th member of the bloc. (25.06.2011)

Slovenia and Croatia have resolved a niggling bank dispute that has proved a sticking point in relations between the two countries. The settlement helps pave the way for Croatia to join the EU. (01.08.2010)

A majority of Slovenians have voted in favor of an agreement between their government and Croatia to allow international arbitration over a long-running border dispute. (07.06.2010)