Donald Trump's presidency struck a nerve in Hollywood, with global stars like Meryl Streep and Robert de Niro calling him out in public. Despite their star power, they are unlikely to sway any voters, experts told DW. 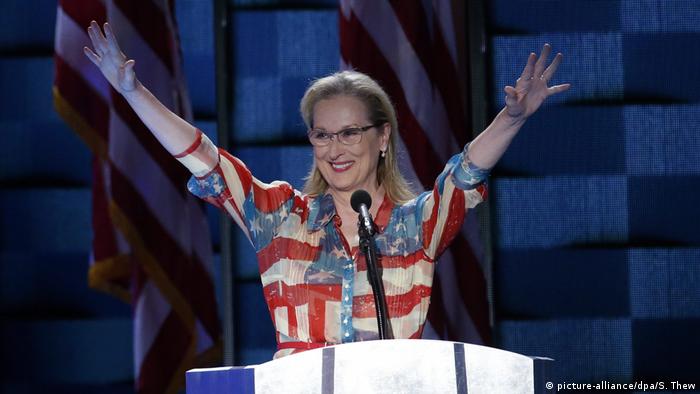 Trump hits back at 'overrated' Streep after Golden Globes speech

Donald Trump hit back at Meryl Streep, calling her an overrated actress after her speech at the Golden Globes. The three-time Oscar winner had criticized the US President-elect's imitation of a disabled reporter. (09.01.2017)

Hollywood is gearing up for its first Academy Awards under President Trump, with his controversial policies casting a long shadow on the proceedings. Trump has faced resistance from heavy-hitters of entertainment industry on a range of issues, most recently over the so-called Muslim ban, which dozens of celebrities slammed as racist.

However, all this effort is likely to go wasted on Trump supporters, according to researcher Michael Cobb from North Carolina State University. Cobb, a political science professor, conducted a study on the impact of celebrity endorsements among college students.

American voters are already deeply divided by party affiliation, and there is little research suggesting that "celebrities are persuasive regarding political attitudes about politicians," Cobb claims.

"Republicans are not going to listen to a celebrity attack Trump and change their minds," he told DW.

Oprah and Obama – a one-time thing?

Many observers point to Oprah Winfrey, arguably the biggest US celebrity in the 1990s, coming out in support of Barack Obama in 2006. The backing of the legendary African-American TV personality helped put the young Chicago senator on the map and may have tipped the scales in his primary run against Hillary Clinton. Still, according to Cobb, this event was more of an exception than the rule.

"It was a unique position. Oprah was seen as serious and thoughtful, she had build this perception of trust and credibility over a number of decades," he told DW.

"How do you choose between, to simplify it, a black man and a white woman? By picking Obama, Oprah, being female and African-American, pretty much said it was okay for women to choose Obama."

Also, Oprah made her political move in a primary race, where the field is much less polarized than in the national elections, Cobb added.

With Oprah's support, Obama defeated Hillary Clinton and went on to beat John McCain in 2008. In 2016, however, dozens of celebrity endorsements were not enough to secure Clinton's victory against Trump.

"The celebrity has to have credibility," Cobb told DW. "So, Katy Perry being trotted out to endorse Clinton was a huge mistake, in my opinion, as her celebrity status was somewhat portrayed with the image of her being a fun-loving, light-headed bimbo."

Still, it is important to note that Katy Perry and other celebrities were very effective when it comes to drawing crowds and getting people interesting in voting. US Democrats have a strategy of contacting people during rallies and encouraging them to register and vote, and a famous name will motivate more people to show up and get more media coverage, he said.

Voters rebel against too much endorsement

Voters might take famous people more seriously if they have expertise on a specific issue, like the U2 lead singer Bono, George Clooney, or Angelina Jolie, who all build up reputations with their humanitarian work.

This expertise plays a key role in weighing celebrity opinions, California professor Valerie O'Regan told DW. Even respected artists like Meryl Streep, who recently made a speech perceived to be a jab at Trump, are not necessarily viewed as credible on politics.

Also, too much celebrity endorsement might backfire on the candidate, O'Regan added.

"If voters in the US feel that celebrities have too much of a voice, if the media is covering them too much, the people might not turn up to vote at all, or do a protest vote for a candidate from another party," according to the researcher. "It is more likely to happen if they get fed up with the candidates, with what celebrities are saying and their coverage in the media."

'No good reason' to go into politics

In addition to harming their candidate, entertainers might suffer blowback from their fans, according to Michael Cobb. His research suggested that people find celebrities less likable, less credible and even less attractive after learning that they hold opposing political views.

According to Cobb, it was not completely clear if this dislike translates to fewer cinema tickets being sold. However, it was reasonable to assume there could be such a relationship, he added.

"There really isn't a good reason for a celebrity to wade into politics on a general election level and visibly do a lot; there just isn't much of a direct benefit to the candidate when it comes to persuasion," he said.

Finally, a public row with a Hollywood star might benefit a politician like Trump, who branded himself as the voice of little people against the "liberal elite." In the short term, Trump is likely to gain even more admiration in his own camp, according to Californian professor O'Regan.

"It will strengthen his support from those people who would argue that Hollywood elites don't know anything about politics, who would ask 'why are we listening to them', and as he argues with them, this support will get stronger," she said "But in the long run, they are going to have to start looking at the policies he is passing. That might sway them in the future, especially in the next presidential election."

"To people who like him, that's just giving them red meat," he told DW. "He is poking [the celebrities] back in the eye." Cobb said.

"I am not sure if Meryl Streep has directly led to the loss of well-being in their lives in any way, but they still like Trump standing up to her, standing up to the elite establishment."