It's the time of the year when CeBIT turns Hanover into a Mecca for the digital world. For the coming week, some 4,100 companies from 70 countries will display the digital world's latest trends. 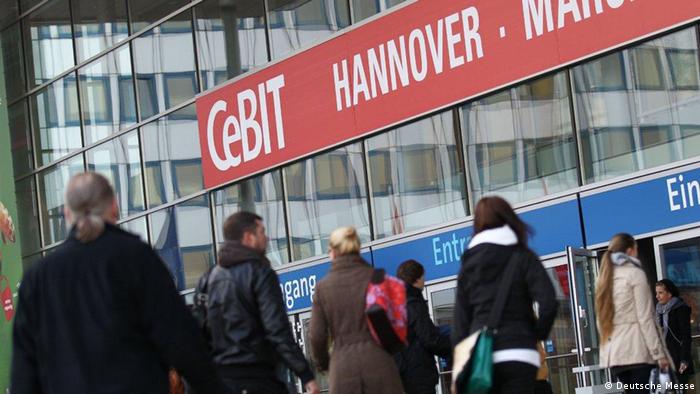 After the Consumer Electronics Show in Las Vegas and the Mobile World Congress in Barcelona, the digital world is now gathering in Hanover. But while the events in Las Vegas and Barcelona focused on the latest smartphones and tablets, starting from today, CeBIT will paint a picture of the whole digital business, its connections with the traditional industry and above all, what the consumers have from the latest technology.

Frank Pörschmann, the head of CeBIT, believes the fair's form and structure is unique. "It focuses on the whole technology sector - IT, telecommunications, electronics and content and all that comes out of this system and network," he told DW.

With its large number of exhibitors and countries represented, CeBIT is still the biggest event of its kind in the world. But most all, said Pörschmann, "it is the most important one. It's where the innovations and the industry business are pushed forward."

This year, CeBIT's theme is "shareconomy" - a growing trend among users to share not only digital data on the Internet, but also organize sharing models for material products - this is especially the case among most young people who share knowledge, experience and music. Cars and bikes can be hired on an hourly basis online. And this year, CeBIT visitors can get a sense of this growing trend.

Knowledge is the only resource that multiplies when it is shared, said Porschmann, "That's the core of what we are seeing today on social networks - in the age of Twitter and Facebook." People are sharing knowledge, contacts and experiences.

"And that - what I call facebookisation - is also a growing trend in the economy. Through it, the availability of knowledge as a scarce resource is widened - that can help the economy development faster and bring about innovation."

Mobile operators also want to be the drivers and beneficiaries of the shareconomy. Because of the steadily falling prices of Internet flat rates, they have to look into other areas, which can bring revenue in the future. Vodafone Germany, for instance, showcasesat its stand a new idea for a carsharing model.

"Using your smartphone, you find a car, book it, and open it," Vodafone spokesperson Kuzey Esener explained.

And the mobile operator is also trying to offer integrated solutions to the working world because jobs are becoming more mobile, Esener said: "The trend spans many sectors. We are also linking the health sector and many other industries, which we're thereby making more efficient."

German IT start-up scene lags behind

The shareconomy isn't the only trend at this year's CeBIT. Mobile apps and cloud computing are also in focus. And security is emphasized as it was already last year.

But it's oftentimes also new companies who take the stage by offering innovative approaches and solutions. More than 200 start-ups from the whole world are in Hanover this year.

But the German start-up scene is yet to gain momentum - something that German Chancellor Angela Merkel criticized in her weekly video address. The possibility to support Internet firms has to be advanced altogether, she said. It has become clear that the venture capital culture is not well-developed in Germany. But a start is being made ​​with a venture capital fund and a high-tech start-up fund.

The chancellor will open CeBIT on Monday (04.03.2012) evening. On Tuesday, she will take a tour of the fair together with Poland's Prime Minister, Donald Tusk - his country is featured as this year's official CeBIT partner nation. One of their stops will be a binational pavilion for young entrepreneurs in the high tech industry.

If you want to write a text message, surf the Internet or simply make a phone call - none of this is a problem with a modern-day mobile phone. But the future devices of this type may even be able to replace your wallet. (25.02.2013)

Tech fair offers a glimpse into the future

Berlin's IFA consumer tech trade fair has all the latest gadgets - from headphones to hair massage machines. But this year, a TEDx debate has taken a peek far into the future. (03.09.2012)