CDU, SPD and Greens use big data to target Bundestag voters | Germany | News and in-depth reporting from Berlin and beyond | DW | 26.08.2017

The Christian Democrats and Social Democrats are going door-to-door collecting voter information. They are hoping to gain access to the electorate in a way that was once unthinkable under Germany's strict privacy laws. 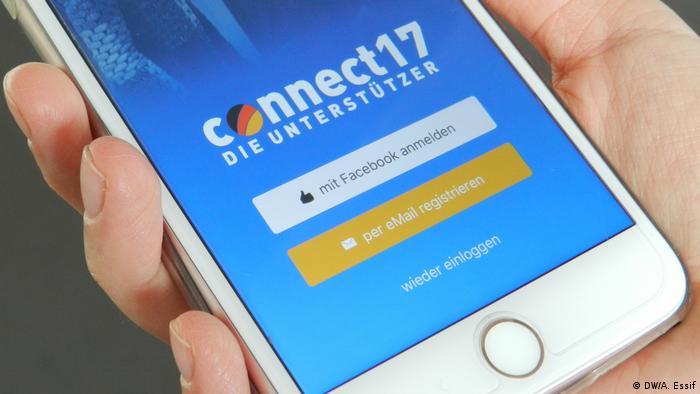 Cornelius Golembiewski takes an iPad and a smartphone with him when he goes door-to-door for the Christian Democrats (CDU). On the iPad, he sees a map of his hometown, Jena, covered in green spots. The green indicates clusters of houses where potential CDU voters are likely to live. 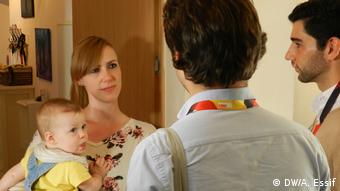 Golembiewski campaigns for the Christian Democrats in Jena

Golembiewski gives a CDU pamphlet to a woman at her home near Jena's main train station and talks to her about the party's goals, just like in any other election season. But what is different this time around is that once she closes the door, he pulls out his smartphone and opens an app called Connect17. First, he clicks on a smiley face to show that the conversation went well and then enters the woman's estimated age, gender and any questions she had about the campaign. (The woman will then have to confirm that she's willing before the data actually gets registered.) When he clicks the last button, he wins 100 points, which will increase his ranking among fellow canvassers.

The Connect17 app has been audited in the German state of Saarland, and Praxisnah, the company that developed it, made a few adjustments to comply fully with privacy laws.

The app is only one of the ways that German parties are turning to data to target voters in the run-up to the Bundestag elections in September.

It's standard practice for candidates in the United States to spend millions of dollars to purchase the records of registered voters - complete with names, phone numbers, ages and voting histories. They can then combine this with data purchased from commercial sources.

Known as microtargeting, this method allows candidates to divide potential voters into small groups and hone their appeals accordingly - sending one message to one group and a different, even contradictory, message to another.

Recent presidential campaigns in the United States are a model for the CDU. Mario Voigt, the party's adviser for mobilization, said innovative efforts such as Barack Obama's in 2008 and 2012 have helped the party rethink the ways it can appeal to voters. But, he said, Germany's strict privacy laws mean that data-driven campaigns look very different here. 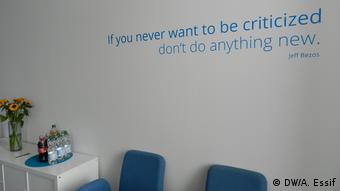 A quote on the wall in Praxisnah's office, where the Connect17 app was developed

German law forbids candidates from collecting personal data on voters without their consent. For example, the country's "four-household rule" means that information cannot be collected on individual voters, or even households: The smallest level of aggregation allowed is four households. So, the information that canvassers collect with the Connect17 app is linked to an exact GPS coordinate, but the CDU is not permitted to record voters' names or addresses, so the party can only build files on general locations and geographical regions rather than individual voters.

According to the CDU, this means that the data the party is amassing will only be useful for targeting people at their homes - not over email or by telephone, as in the United States. "There is no big data campaign in Germany," Voigt said. "Just a well-organized direct-appeal campaign."

Even anonymous data enable politicians to craft their messages and target their outreach, and German parties are trying to get more of it. This year, the CDU's main rivals, the Social Democrats (SPD), developed a digital survey that works on the same principle as Connect17. The Tür zu Tür (Door-to-Door) smartphone app can be used to collect information about contacted residents' political interests.

Tobias Nehren, the SPD head of digital campaigning, denied that Tür zu Tür was a form of microtargeting. "We're not building profiles of people," he says.

Even if microtargeting is not illegal, critics worry that it is undermining the transparency of the election process. "It's a question of how you define 'microtargeting,'" said Johannes Hillje, a political consultant who led the 2014 campaign of the European Green party in Brussels. "'Micro' can also mean a small group of people."

Though parties do not store individual information, Hillje said, the anonymized data could be combined with Facebook's advertising tools to target voters personally. One Facebook function in particular has Hillje worried. The social network offers parties to target ads that only select people will see. In theory, this would allow them to send pro-immigration messages to some voters and anti-immigration messages to others; no one would get both ads at once, which means people could support the same party for completely opposite reasons. 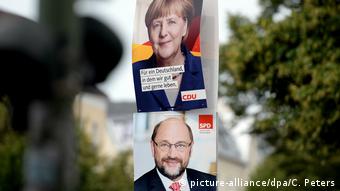 CDU officials claim that their party is not collecting data to manipulate voters but to find them. "What campaigns always have too little of is time, money and resources," the mobilization adviser Voigt said. To him, it is only logical to spend limited resources in areas where voter mobilization is most likely.

The Connect17 app has already been tested in elections in three German states this year. In each one, voter turnout increased on the whole, though it is impossible to say how much of that could be attributed to the app. In North-Rhine Westphalia, where Connect17 users knocked on more than 100,000 doors, votes for the CDU increased by nearly seven percentage points.

"So far it has worked," Voigt said. "We hope it works again on September 24."