Catholics protest priest killings in Philippines | Asia | An in-depth look at news from across the continent | DW | 19.06.2018

Religious groups and concerned citizens in the Philippines took to the streets to protest the brazen killing of three Catholic priests over the past several months. Ana P. Santos reports from Manila. 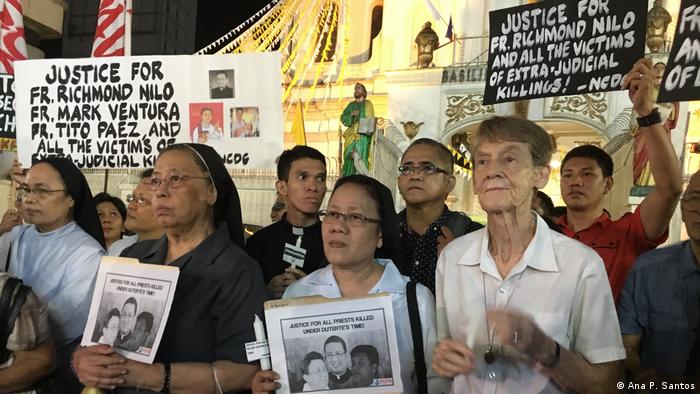 Father Richmond Nilo, 40, was at the altar preparing for church services in his parish in the province of Nueva Ecija, about 180 kilometers north of the Philippine capital Manila, when he was shot four times by two unidentified gunmen on June 10.

He is the third priest to have been killed over a span of six months: in April this year, Father Mark Ventura, 37, had just finished celebrating mass when masked assailants shot him. Last December, 72-year-old Father Marcelito Paez was killed by unidentified assailants while he was driving home.

Meanwhile, another priest survived an assassination attempt earlier this month.

At religious services held for the three slain priests in the city's financial district on Monday, June 18, Father Flavie Villanueva expressed his grief and anger.

"Mad would be an understatement. We are enraged. The president has succeeded in instilling fear and a culture of killing in the country," Villanueva told DW, referring to President Rodrigo Duterte's violent and contentious war on drugs.

A resolution to open a senate inquiry into the killings filed by an opposition senator, Risa Hontiveros, was rejected by Senate President Vicente Sotto III, who called the killings a mere "coincidence."

"Once is an unfortunate random event. Twice could be a coincidence. Thrice is a pattern," Hontiveros said in a statement.

"The killings are continuing and are too similar to be dismissed as 'mere coincidence.' There is clearly a pattern. First, the killings come on the heels of President Duterte's continued verbal attacks on the Catholic Church. Second, the three killed priests were vocal critics of state abuses. Third, they were killed within a span of six months, with two being murdered while conducting religious services," the statement continued.

In April, Australian nun Sister Patricia Fox was arrested after participating in street rallies protesting the Duterte government's war on drugs. The nation's Bureau of Immigration then declared her visa forfeit and decided to deport the nun. But the Department of Justice yesterday nullified the deportation order, saying the order was "without legal basis."

Fox was present at another prayer rally for the slain priests in Manila on Monday. Asked if the recent events and the move to have her deported constituted a deliberate systematic attack on the clergy, Fox told DW, "It would seem so."

The Philippines is the only country in Southeast Asia where almost 90 percent of the more than 103 million Filipinos are professed Catholics.

The church has played a vital role in galvanizing public support in ousting two past presidents, dictator Ferdinand Marcos and Joseph Estrada. Thus, presidents have always tried to remain in the church's good graces.

But Duterte has never kept his disdain for the church a secret.

The 73-year-old president claimed that he was molested by a priest as a teen and has vilified the church in various speeches. He called out the church on its excesses, saying it was "corrupt" and "hypocritical," referring to the sex scandals that have rocked the institution.

In response to Ventura's death, Duterte produced a matrix, alleging that the priest had had affairs with at least four different women.

The president has also rejected pleas from church officials to "stop the verbal persecution of the Catholic Church" as these tirades embolden more acts of violence. "The problem with these fools is they think they are all saints, but the government, military, police are all demons," said Duterte. On Monday, June 18, religious services were held for the three slain priests in Manila's financial district

The church has openly expressed its opposition to the government's war on drugs that has left more than 20,000 dead in a mix of vigilante killings and police drug bust operations, but has been careful not to place outright blame on the president.

Duterte, through his spokesperson Harry Roque, has expressed alarm over the acts of criminality and warned of a "radical change" to maintain law and order in the country.

Lito David, a radio announcer at faith-based radio station Radio Veritas, told DW that he was not surprised by the Duterte administration's efforts to discredit the church.

"From the very start, the president has attempted to discredit the church. It is meant to weaken the institution and its resolve to push back against the government's abuses," said David, adding that the church is the only institution with the structure, the network, and the people to counter the president.

"That's why he needs to bring down this institution."

The EU and the Philippines have signed a multimillion dollar economic cooperation deal. But should the EU be assisting a country whose government is allegedly involved in massive rights abuses? Ana P. Santos reports. (02.03.2018)

Will divorce finally be legalized in Philippines?

Apart from the Vatican, the Philippines is the only country in the world where divorce is illegal. Public pressure and a proposed bill in the country's parliament may change that. Ana P. Santos reports from Manila. (27.02.2018)