Catholics may be leaving German churches, but their fellow congregants from around the world are writing in with their ideas on how the Church might be fixed. 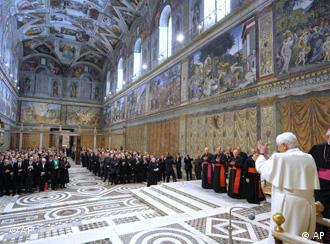 Catholics have been leaving the Church in Germany

You ask what the church can do to win back Catholics. If the church really wants to try to win back the people it must do what it will never do. It must give a real voice to the lay people. It must replace the old power structure with an entirely new organization. The existing power structure has so thoroughly discredited itself that it is beyond redemption. Those trained by the existing structure to become the future leaders are also discredited so the new leaders must be independently selected by the people. This applies to the Catholic church worldwide. -- C. E., US

We've heard for years about the "fruits of the council." Well, now we know who these fruits are. This has all come about since Vatican II, the "Great Council," and flourished under "John Paul the Great," who appointed these bishops. The scandal that still gets no coverage is the horrible state of the liturgy and the disobedience of these same bishops who have been instructed to let us have the old Mass back and refuse to do so. We need the old Mass, because it instructs the faithful so much better than the new. -- David, US

It is not a question of what the Church can do to win Catholics back, but of those lapsed Catholics realizing that scandal in the Church has always been, and always will be, present in the Church. The present abuse scandal is nothing new. Christ promised the Church infallibility in proclaiming His gospel; He did not promise her impeccability in the conduct of any particular members. Those German Catholics who have deserted the Church because of the abuse scandal would be well advised to reflect on this fact, and return to their religious duties before their desertion causes irreparable harm to their souls. -- Geoffrey, United Kingdom

Before Vatican II the Catholic Church was in robust health. It had full seminaries and convents, flourishing parishes and full churches on Sundays. After the destruction and modernization of the Liturgy, cracks in the wall appeared and the de-evolution started. Bring back authentic Catholic tradition, restore the integrity of the Mass, and things will change. Vatican II started all this. Time to rethink Vatican II and restore what has been thrown out. -- Thom, US

Appoint pastoral bishops rather than functionaries! Most of our present bishops are CEOs and administrators. They are not at all pastoral in their approach and lack of relatedness... Their "canonical" stance trumps pastoral response. -- Aristophilos, US

The abuse scandal has hit Wisconsin with the Milwaukee Archdiocese declaring bankruptcy! This area is but a speck on the map. The church teaches forgiveness but worldwide many will not forget. -- Dave, US

Change the Homily subject at the Mass. Be honest and forthright in speaking of the sexual abuse that has occurred and still taking place: How some bishops and priests have placed little or no importance on this sin and what the Church is doing and intends to do to resolve this issue. The people need to know that the Church is not at fault but those members of the Church who commit these atrocities. Let these truthful and honest confessions be made into homilies that will go on for a period of time. This is so important to get the right message to your people. The people need to know what the Church in Germany is doing to alleviate this failing. The Church is Holy and the Bridegroom of Christ and cannot sin. Only the people within can sin. -- Stash, US

The scandal exists now in most of the countries in Europe. The beginning of the solution could be: a better education in families, the schools and the Church giving the same importance to girls and boys. And secondly give permission to all deacons, priests and bishops to marry if they want. They should be permitted to divorce, because they are humans and not angels! Then the situation of our Church would be clear and sane: now it is absolutely not! -- Edith, Belgium

It's so painful to observe how people leave Catholic churches because of those sad problems. Catholicism supports sharing, fraternity, science, education, kindness, peoples' rights and charity. Missions work all over the world, etc. At eight years old I started sharing my weekly allowances with Catholic missions who helped educate abandoned children, promoting sports, training skilled workers, rescuing people from the streets and teaching us humans to try to understand each other. Their work has been remarkable. God bless and give wisdom to the bishops to find the right decision. We'll keep praying for the world. -- Blue, US