Theodore McCarrick has been charged with sexually assaulting a teen boy in the 1970s. The charges make him the first US cardinal to face criminal charges of sexual abuse of a minor. 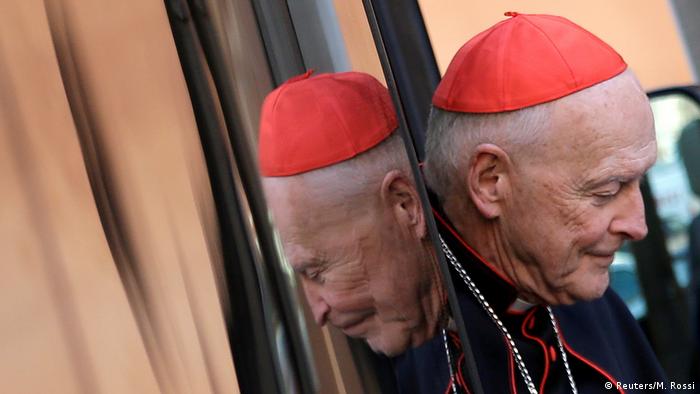 Theodore McCarrick was charged on Thursday with the criminal sexual assault of a minor in the US city of Boston. The 91-year-old thus becomes the first Catholic cardinal in the US to be criminally charged for such crimes.

The Boston Globe newspaper said it obtained court documents stating that McCarrick had been charged with three counts of indecent assault and battery on a person over 14.

Defrocked by the Vatican after an investigation into the former priest found evidence that he had sexually molested adults and children, the criminal charges now being brought against McCarrick stem from the sexual assault of a teenage boy in 1974.

Lawyer Mitchell Garabedian, who is representing the victim, lauded his client's bravery, saying: "It takes an enormous amount of courage for a sexual abuse victim to report having been sexually abused to investigators and proceed through the criminal process," adding, "Let the facts be presented, the law applied and a fair verdict rendered."

What did McCarrick do?

McCarrick had been a friend of the victim's family according to court documents that claim the priest began abusing the victim when he was just a boy. They also cite a specific incident in which the victim says McCarrick molested him during his older brother's wedding reception in 1974, when the victim was 16 years old.

The victim says McCarrick told him to say "one Our Father and three Hail Marys so God can redeem you of your sins," after having led him into a separate room and fondling him.

What did the Catholic Church know?

McCarrick's power within the Catholic Church protected him from punishment for decades. Despite ample reports about the US cleric's disturbing behavior, it was not until 2019 that the Vatican finally acted.

The Holy See had known about credible accusations of McCarrick's inappropriate sexual conduct dating back to at least 1999, nevertheless, neither Pope John Paul II nor Pope Benedict XVI took action.

Despite his penchant for abusing his authority within the Church, McCarrick's status in the US Catholic Church and his ability to raise funds for Rome led the Vatican and the US Church to turn a blind eye.

Pope Francis, facing a major crisis of confidence in the Catholic Church's honesty in confronting the problem of sexual abuse by priests, ordered an investigation that ultimately confirmed McCarrick was a sexual predator. He was officially defrocked in 2019.