Catalonia's former Education Minister Clara Ponsati has been given bail after turning herself in at a police station in Scotland. Meanwhile, Catalan lawmakers gave their backing to former President Carles Puigdemont. 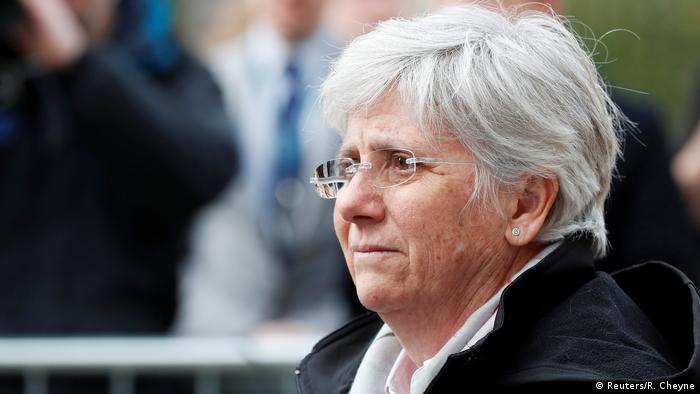 Ponsati, who is wanted by Spain for her part in last year's referendum and independence declaration, handed herself in at an Edinburgh police station on Wednesday.

The former education minister, who is now a professor at the University of Saint Andrews, has been living in Scotland since Spain issued an arrest warrant for her last November.

A hearing at Edinburgh Sheriff's Court, where a large crowd had gathered outside holding aloft Catalan flags, ruled that Ponsati be released on bail and that she should hand over her passport.

Ponsati's lawyer Aamer Anwar said she would contest the charges, which amounted to political persecution.

"My legal team is instructed to robustly defend Clara, as she views these charges as 'political persecution' and a systematic attempt to crush the spirit of the Catalan people and their desire for freedom," Anwar said.

"She does not believe that the Spanish courts can guarantee independence, human rights or justice," Anwar added. "Clara remains defiant, resolute and is determined to fight back." 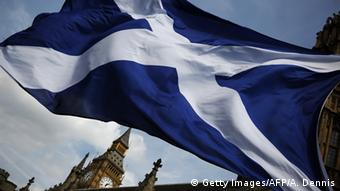 Scotland voted against independence from the UK in a 2014 referendum

Anwar thanked the "many hundreds of thousands of ordinary people" who had backed Ponsati, including Scottish First Minister Nicola Sturgeon.

Read more: Protesters mock Catalan independence bid with secession call of their own

While Sturgeon has backed the Catalan politicians, she has also made clear that politicians have "no powers to intervene" in the extradition process.

"Scotland has been a true friend to Catalonia in her darkest hours," said Anwar. "However it is absolutely right that the independence of the judiciary in Scotland is respected and that no government should ever interfere in that process. Clara accepts her fate now lies in the hands of the Scottish justice system."

Spain's Supreme Court said it will prosecute 13 leading separatist figures for "rebellion," a crime that carries a maximum punishment of 30 years in prison.

Puigdemont was arrested in Germany on Sunday, as he was driving from Finland to Belgium, where he has been living since last November.

The Catalan parliament on Wednesday passed a symbolic resolution affirming the right of Puigdemont to be re-elected to his old job, despite being in jail. Puigdemont, who is being held at Neumünster prison in northern Germany. His detention led to protests in Catalonia, where major roads were blocked.

The former Catalan president could remain in custody for up to 90 days, while a decision is made.

Aside from Puigdemont, nine other Catalan secessionists are in pre-trial detention in Spain. They include his former deputy Oriol Junqueras, as well as a new candidate for the Catalan presidency, Jordi Turull.