Social media has given companies and advertisers the possibility of creating ad campaigns which are controversial and go viral. Now one car rental company has created an ad making light of hitting cyclists. 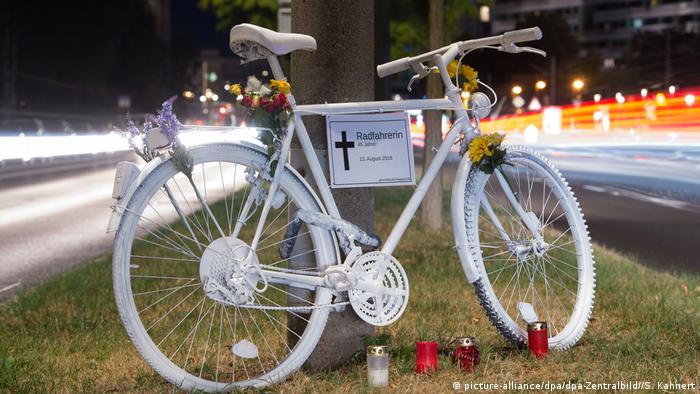 The 2017 Palme d'Or-winning Swedish satirical film The Square has a memorable sequence about the lengths advertising agencies will go to in order to grab attention for a product, however vacuous the campaign — or indeed the product — is.

Needing to whip up interest in a patently ridiculous modern art exhibition called "The Square," the advertising men come up with a YouTube video portraying an impoverished child being killed in an explosion after entering the exhibition, supposedly a haven of peace. The clip draws widespread condemnation but also goes viral, stirring mass interest in something which hardly warrants it.

As one of the world's biggest car rental companies, you might think Sixt has no major need for such advertising gimmicks. Yet in recent years, the Munich-based company has tried to cultivate something of an image around its use of banter and humor in its advertising campaigns.

The company's social media campaigns have shown particular evidence of this, particularly when it comes to political matters. However, one advertisement in recent weeks appears to have gone too far, with Sixt removing it from their channels on Friday after considerable criticism.

Released on the official "Sixt Germany" Twitter account on October 5, the advertisement shows a picture of a supposed bumper sticker the company has made for drivers who "overdo it." 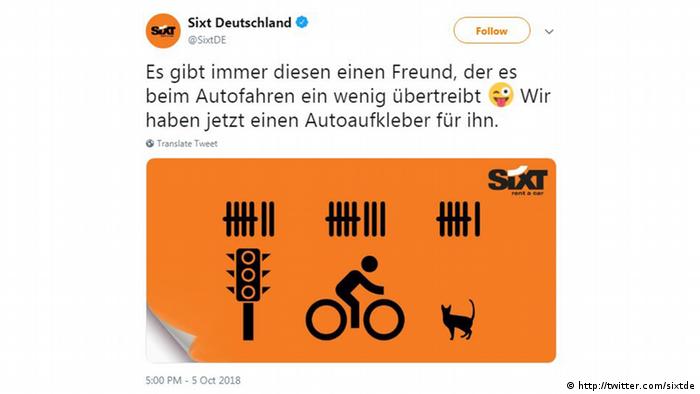 The original tweet from Sixt (seen above) has since been deleted

The sticker appears to show the "hit count" one such driver has built up against three targets. Traffic lights have been infringed seven times, cats have been hit six times and top of the pile with eight hits? Cyclists.

"There's always one friend who overdoes it a bit when driving. We now have a bumper sticker for him," the advertisement proclaims, alongside an emoji that will be recognizable as a symbol of brazen cheekiness to many smartphone users — a face with a stuck-out tongue and a winking eye.

Read more: Road deaths in Germany fall to all-time low but accidents on the rise

Although the ad did not quite hit the viral numbers its creators may have sought — at the time of writing it had accrued a modest total of 19 retweets — it did provoke much negative comment from Twitter users underneath, particularly in the last two days.

Having left the tweet online for two weeks, Sixt deleted it around 12:00 CET on Friday afternoon.

A cyclist advocacy group from the Berlin district of Charlottenburg-Wilmersdorf commented underneath the initial tweet: "This advertisement is a mockery and shows a pure lack of taste for cyclists who have been killed or severely injured by drivers."

One user drew attention to an incident which the police in the western German city of Bonn highlighted back in June this year, when the driver of a white Sixt van hit a child cyclist with their car door before fleeing the scene.

At the time of writing, Sixt has not responded to DW's requests for comment on the advertisement.

The reality of hitting cyclists

According to the German Statistical Office Destatis, in 2017, 382 bicycle users were killed on German roads. Between 2014 and 2017, the total was 1,554 — comfortably the highest number in the EU.

Indeed, a Greenpeace study, published earlier this year, found that cyclists in the German cities of Berlin, Hamburg and Stuttgart were 10 times more likely to be killed than in the Danish and Dutch capitals, where governments have invested far more heavily in cycle infrastructure.

A spokesperson for the ADFC, the largest representation of cyclists in Germany, said the organization would prefer not to give the ad campaign any extra attention.

"We don’t want to promote the Sixt sales strategy to create broad media coverage by dumb provocation," she told DW.