A car bomb has hit France's embassy in the Libyan capital Tripoli, injuring at least two guards and causing extensive damage. Libya's foreign ministry has condemned the incident as a "terrorist attack." 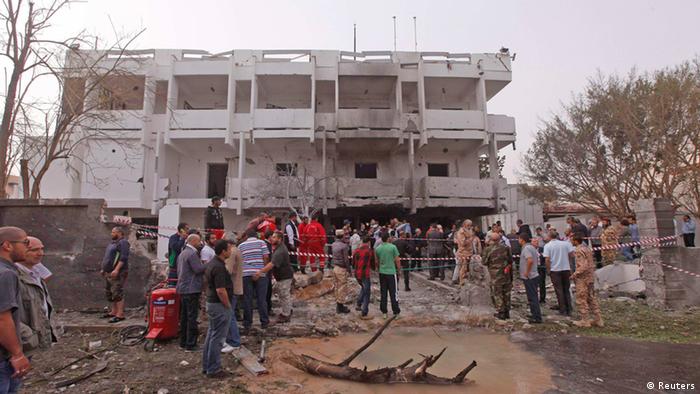 Two guards were injured early Tuesday when the explosion hit at around 7 a.m. local time (0500 UTC). An unnamed embassy official told news agency Reuters it appeared the blast was caused by a car bomb outside the embassy's entrance.

"There was an attack on the embassy. We think it was a booby trapped car," the official said.

"There was a lot of damage and there are two guards wounded."

According to news agency AFP the embassy building was badly damaged and two cars parked nearby were destroyed.

Libya's Foreign Minister Mohammed Abdel Aziz condemned Tuesday's bombing as a "terrorist attack." However he declined to comment on who may have carried out the attack or possible motives.

"[France will] do everything it can to shed light on the circumstances of this abhorrent act and to quickly identify the perpetrators," he said in a statement.

"I send my solidarity and deepest sympathy to the two injured French guards and my wishes for their recovery," Fabius added.

A foreign ministry spokesman said France had not received any specific threat to the embassy in Tripoli, but was aware of a generally increased risk. The embassy is currently out of action and staff are being moved.

President Francois Hollande said: "France expects the Libyan authorities to shed light on this unacceptable act so that the perpetrators are identified and brought to justice."

Tuesday's incident marked the first attack on a foreign mission in Libya since militants stormed the US diplomatic mission in the eastern city of Benghazi last September, killing US ambassador Chris Stevens and three others.

Since the ouster of long-time leader Moammar Gadhafi in 2011, Libya's new leaders have struggled to assert authority over a nation awash with weapons and armed militias.