A car bomb has gone off shortly after Nigerian President Goodluck Jonathan left an election campaign rally. There was no immediate claim of responsibility for the blast. 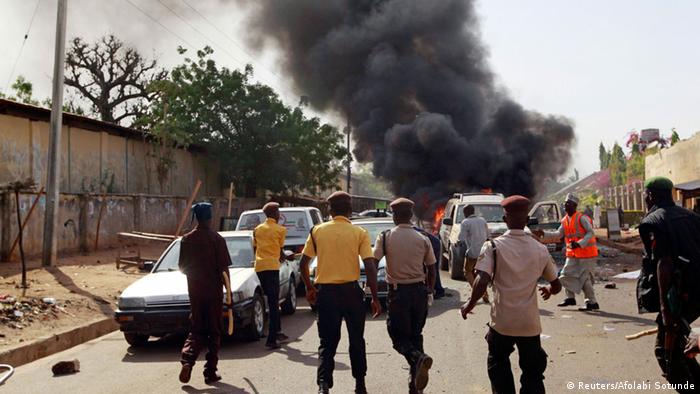 Witnesses told news agencies that the car bomb had detonated just minutes after President Jonathan had departed from the stadium in the northeastern Nigerian city of Gombe. There was no immediate claim of responsibility for the blast.

Witnesses told news agencies that the cab bomb had detonated just minutes after the president had departed from the stadium in the northeastern Nigerian city of Gombe, where he had addressed supporters of his People's Democratic Party on Monday.

The Reuters news agency cited one of its own photographers, who said the bomb went off around 200 meters (220 yards) from the stadium, engulfing the car in flames. According to the unnamed photographer, at least one bystander was killed and seven others injured in the explosion.

The AFP quoted an unnamed local reporter who said the president's convoy had just passed the parking lot where the car was located, when the bomb went off. It also cited another witness named as Mohammed Bolari, who had attended the campaign rally.

"It is difficult to say how many people were affected because of the confused struggle by the huge crowd leaving the venue to escape for fear of another blast," Bolari said.

Later, the AFP cited a rescue services worker who suggested the bombing may have been the work of suicide bombers.

"We have evacuated two bodies of females we believe were suicide bombers behind the blast," the rescue worker said.

There was no immediate claim of responsibility for Monday's bombing, although suspicion is likely to fall on Islamist militant group Boko Haram, which has attacked the city several times.

President Jonathan's campaign stop came just a day after at least five people were killed in two bombings in Gombe, including one that targeted a military checkpoint. He is seeking re-election in the presidential election to be held on February 14.

A suicide bomb, apparently carried by a pre-teen girl, has exploded in a crowded market in northern Nigeria killing at least 18. A pair of suicide bombers also set off another blast at a Nigerian police station. (10.01.2015)