A car chase and gunfire near the US Capitol have briefly forced a recess inside Congress as politicians debated how to end a government shutdown. Police said the woman driver first tried to ram a White House barricade. 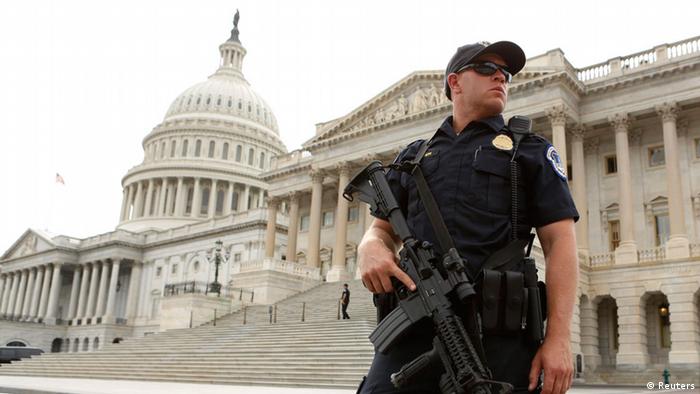 A woman motorist was shot dead outside the US Capitol on Thursday after allegedly trying to ram a car through White House barriers, according to police.

The incident prompted a short lockdown of the US Capitol where lawmakers were trying to find a solution to a budget impasse that since Tuesday had partially shut down federal government services. Both houses of the US Congress, the House of Representatives and the Senate, convene in the Capitol building.

The identity of the driver was not initially disclosed, but Washington's police chief Cathy Lanier said "the suspect in the vehicle was struck by gunfire and at this point has been pronounced (dead),"

Security officials had fired at the black car when it crashed near the US Supreme court and a Senate office building. A passenger in the car, a young child estimated to be one year old, was taken to hospital. A police officer was also injured during the incident.

Michael McCaul, a Republican who said he was later briefed by the Homeland Security Department, claimed that the woman was killed. Asked if she was armed, he replied: "I don't think she was. There was no return fire."

Some 20 police vehicles had pursued the car toward Capitol Hill after its driver first tried to ram two barriers outside the White House.

"They ran all the red lights. It was a very dangerous situation," Gilbert said.

Other witnesses also outside the Capitol said they heard gunshots. One police car hit a bollard and was damaged.

At the time, the Capitol was full of congressional lawmakers and staff involved in the stalled budget talks.

Investigators are trying to determine what led a military veteran to open fire at a US Navy facility in Washington, killing twelve people. Authorities have also questioned how an armed man was able to enter the complex. (17.09.2013)

The House of Representatives had just finished approving legislation aimed at easing the shutdown by paying National Guard and Reserve members.

US Capitol police on duty during the incident said they were working without pay as a result of the shutdown.

The alert was lifted after an hour and tourists were allowed back onto the Capital grounds.

The shooting rattled the US capital three weeks after a government contractor opened fire at the Washington Navy Yard, about 2.4 kilometers (1.5 miles) from the Capitol, killing 12 people and wounding three others before he was shot to death by police.