Russia intruded in Canadian airspace this week, according to Canadian military officials. Russian authorities said the bombers were on a training flight in international airspace and did nothing wrong. 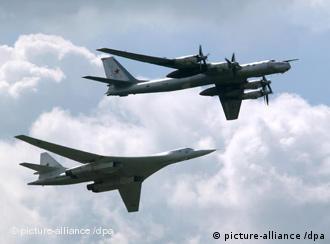 Military presence may be growing around the Arctic

"The two Russian TU-95 bombers have returned to their base without incident," Canadian Defense Ministry spokesman Jay Paxton told news agency AFP of the situation that occurred Wednesday over Labrador.

The incident occurred 500 kilometers north of Goose Bay in the east of Labrador where the Canadian air force has a large base.

Russian authorities told Canadian media that the bombers were on a training flight in international airspace and did nothing wrong.

The Russian jets are capable of traveling up to 14,000 kilometers and can carry nuclear missiles.

Tension has increased in relations between nations with Arctic claims in recent years, due to each country's desire to tap the region's estimated 90 billion barrels of oil.

Although Canada, Denmark, Norway, Russia and the United States pledged in 2008 to try to avoid territorial disputes, a recent Canadian study found there has been an increase in military presence in the far north.

Russian bombers have in recent years breached the airspace of Canada, Iceland, Japan and the United Kingdom.

Moscow and Oslo have struck a deal that equally divides the long-contested Barents Sea between them. The agreement ends decades of negotiation over the inhospitable area believed to be rich in oil and gas deposits. (27.04.2010)

An increase in incidents where Russian warplanes have infiltrated the sovereign airspace of EU and NATO countries is causing concern among European defense chiefs. Experts believe the Russian bear is flexing its muscles. (04.04.2010)