Liberal leader Justin Trudeau looks set to form another minority government following Canada's parliamentary election. The prime minister framed the vote as a referendum on his party's handling of the COVID pandemic. 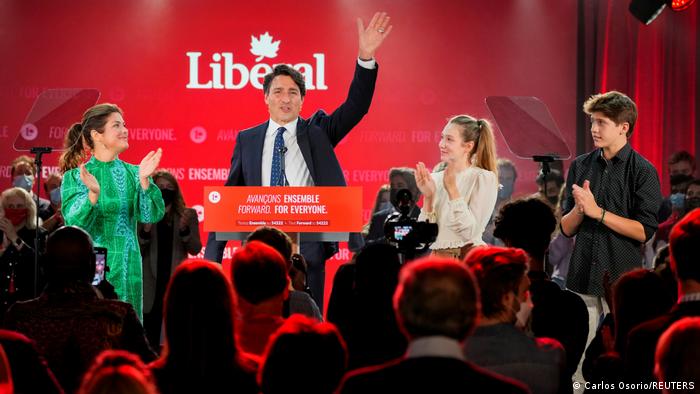 Prime Minister Justin Trudeau's Liberal Party is set to win the most seats in Canada's snap election, according to incomplete results on Tuesday. However, the ruling party fell short of securing a majority government against the rival Conservatives, led by Erin O'Toole.

Trudeau points to 'brighter days ahead'

Trudeau needed to secure 170 seats for his party to control the parliament. The result, however, shows only a marginal improvement for the Liberal Party since the 2019 polls.

The prime minister had called the snap vote to get a clearer indication of how Canadian's viewed his handling of the COVID-19 pandemic.

While a minority government may not have been what he was looking for, Trudeau said in an address to his party: "You are sending us back to work with a clear mandate to get Canada through this pandemic, and to the brighter days ahead," adding, "what we’ve seen tonight is that millions of Canadians have chosen a progressive plan."

Trudeau acknowledged that he would have to work with other parties.

"You just want to know that your members of parliament of all stripes will have your back in this crisis, " he said to supporters in the address in Montreal.

Conservative Party leader Erin O'Toole said the vote and talk of more voting was a source of division among Canadians. "Tonight Canadians did not give Mr Trudeau the majority mandate he wanted. In fact Canadians sent him back with another minority at the cost of $600-million and deeper divisions in our great country."

Trudeau appears to have taken the criticism to heart, saying that "Canadians do not want to hear about elections anymore." 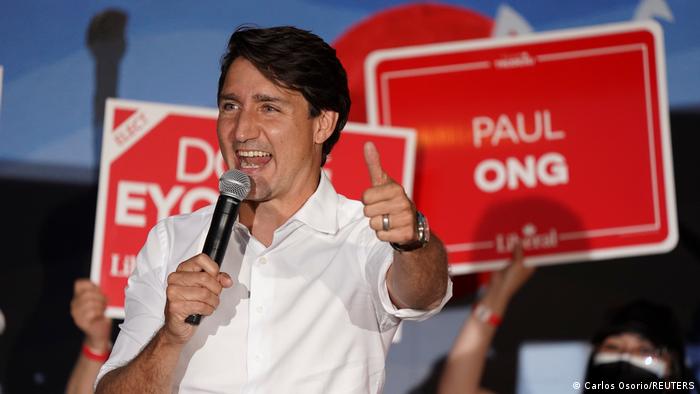 "Our partnership has never been closer than the past years." German Foreign Minister Heiko Maas tweeted in a congratulatory message to Trudeau. "Looking forward to working with you to defend democratic values, uphold the international order and defend human rights."

European Council President Charles Michel tweeted his "warmest congratulations" to Trudeau. "In these times we need solid friendships to promote multilateral solutions, and build on our strong cooperation and shared values," Michel said.

Ukrainian President Volodymyr Zelenskyy said in a congratulatory note to Trudeau that he is sure "the special partnership between Ukraine and Canada will be further strengthening."

What were the main election issues?

The charismatic Trudeau, son of former Prime Minister Pierre Trudeau, swept into office in 2015. However, his grip on power was significantly reduced after a second election in the fall of 2019 resulted in a minority government. His image as a modern, anti-discrimination leader suffered after photos surfaced of him in blackface at a university party in 2001.

Another reason the Liberal party leader called for the snap vote was to reinforce the mandate for his administration's handling of the COVID-19 pandemic. With over 73.4% of the population vaccinated, Canada ranks among the countries with the highest number of immunized people in the world.

One of the main issues on the campaign trail has been the next step in combating the virus, with Trudeau advocating for an even more robust vaccination campaign, including national mandates. O'Toole has been promoting the use of rapid testing instead.

"This election is about building a better future for our kids and grandkids. That's why we need you to make your voice heard today and vote for the future you want to see," Trudeau tweeted Monday with the hashtag #Forward for Everyone.

O'Toole posted a photo of himself and his wife casting their ballots on Monday. He claims to have a plan "to secure a better life" for Canadians while supporting tax reform and a more aggressive foreign policy toward China.

In a country where nearly one in four people identify as a minority, Trudeau took to Twitter to announce the "historic nomination." In its 146-year existence, Canada's Supreme Court has only ever had white justices.