Canada has passed an anti-terror law that drastically expands the powers of its spy agency, allowing it to intercept finances and hijack Twitter accounts. But critics are concerned it will "erode" their freedoms. 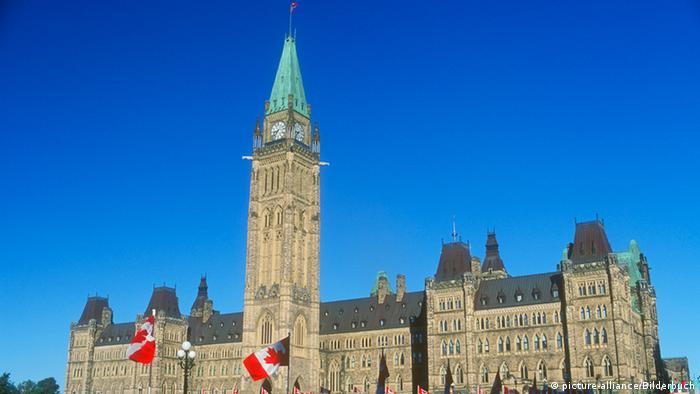 Canada's House of Commons passed on Wednesday night an anti-terror law that drastically expands the powers of its intelligence gathering agency, allowing it to operate overseas for the first time.

The bill passed in a 183 to 96 vote by Prime Minister Stephen Harper's Tory majority parliament. The law is meant "to protect Canada against activities that undermine [its] security," according to the bill's text.

The bill was first proposed in February in response to two attacks on Canadian soil that left two soldiers dead in 2014. At least six Canadian citizens have died fighting in Iraq and Syria over the past two years.

"We need to make sure that the jihadi international terrorists who are threatening us are prevented from acting by filling the gap of our information sharing," Public Safety Minister Stephen Blaney said in parliament.

It also expands the spy agency's ability to gather intelligence and thwart terrorist attacks outside Canada's borders, a first for the North American country.

Before being passed on Wednesday, the bill was widely criticized by activists and public figures. Many, including renowned author Margaret Atwood, lambasted the spy bill for lacking oversight and potentially threatening ordinary citizens.

MP Randall Garrison, a politician of the New Democratic Party, also voiced concern in parliament prior to the bill being passed.

"Thousands of Canadians took to the streets to protest this bill which will erode our rights and freedoms," said Garrison.

"These people don't want fear to triumph over the values that guide our democracy."

The bill marks Canada's largest anti-terror legislation overhaul since 9/11, when it followed the US in passing major national security measures.