The #WashTheHate campaign in the US calls for solidarity with Asian-Americans who have seen an increase of attacks since the outbreak of COVID-19. It makes clear that hate will get you sick, even if the virus doesn't. 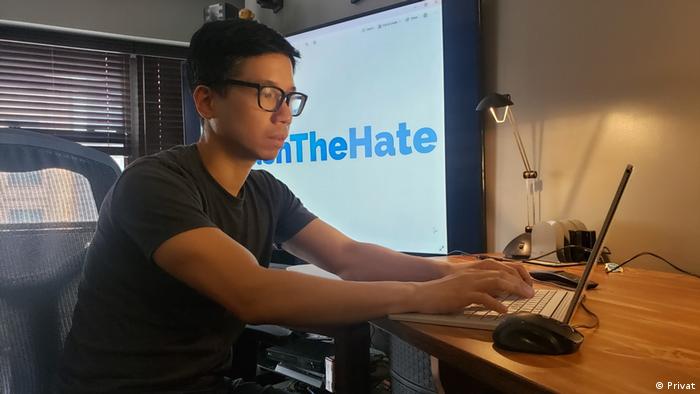 Since growing up in New York City, Telly Wong has witnessed the September 11 terror attacks, Hurricane Sandy and now COVID-19 — and racism aimed at Asian-Americans that has accompanied the virus.

In addition to the growing number of news reports about Asian-Americans being attacked, one of Wong's friends told him that a stranger attacked her on the street while she had on a mask before many other people had started wearing them — she ended up with a broken hand.

Wong said the coronavirus attacks reminded him of another series of crimes committed against Asians in the United States.

"I remember being a kid in the 80s and 90s, there was a rush of assaults and robberies and even murders of Chinese delivery men", he told DW. "They were just reported as hit and runs. No one connected the dots."

Now a senior vice president at a New York marketing and communication agency, Wong said he knew he could raise awareness of the issue and help people connect the dots this time

He and his colleagues launched the #WashTheHate campaign on March 18 to collect and publish stories and videos of incidents that would otherwise go unnoticed. The timing was right: A day before the planned launch, US President Donald Trump publicly called the coronavirus the "Chinese virus."

"Wash away the hate!"

Actor Tzi Ma is one of the campaign's supporters. He describes himself on Instagram bio as "Hollywood's favorite Asian dad." The Chinese-American star is known for his role in the "Rush Hour" film series and recently played another Asian dad in the drama "The Farewell."

Ma was one of the internet and entertainment celebrities who posted a video for #WashTheHate. In his video, the 57-year-old washes his hands while talking to the camera: "We all know washing our hands can help us prevent the coronavirus affecting us physically. But what about what the virus can do to us emotionally? We are all scared. We act out of our fears by wearing masks, hoarding supplies and, sadly, some of us lash out at Asian-Americans as if Asian-Americans were responsible for this virus just for being of Asian descent. Stop it. Acts of violence against Asian-Americans will not stop the spread of this virus. The next time you wash your hands, wash out the hate you may have for your fellow Americans. Hate will get you sick, even if the virus doesn't."

Talking about the campaign, Ma told Variety magazine about how a driver of a car next to him at the supermarket yelled, "You should be quarantined!" before driving away. It was one of many incidents happening across the United States as the coronavirus spreads.

In Texas, a Burmese-American and his two children were attacked and injured by a man with a knife. The FBI said the 19-year-old suspect likely tried to kill the family because they looked Chinese and he believed they would spread the coronavirus.

In Brooklyn, a man yelled at a 26-year-old at a train station, telling her to, "Go back to China! Get your temperature checked. You need to leave!" He then went on to steal her phone.

Between mid-March and mid-April around 1,500 attacks or harassment cases were recorded across the United States with most instances occurring in California and New York, according to Stop AAPI Hate, an association of several NGOs in the United States that has launched a hotline to track verbal abuse, assault and hate crimes against Asian-Americans related to the outbreak of COVID-19.

While a social media campaign can't stop violence on its own, Duncan Hwang of the Asian Pacific American Network of Oregon told DW it is important to push back against harmful narratives and highlight the challenges and experiences Asian-Americans are experiencing.

"Those incidents really shake people and make them feel uncomfortable to go out. It also normalizes violence against Asian-Americans." Hwang said.

For some in the United States, it is Asian-Americans who have been made into the culprits of the coronavirus, said Wellington Chen, executive director of New York City's Chinatown Partnership.

"We consulted crisis management experts and learned that historically, whenever there is a pandemic, yellow fever or plague, after the hysteria phase, there is a second phase: Who is the devil?" Chen said.

He added that witnesses speaking out about racially motivated attacks play an important role in preventing them from escalating.

"Around 14 percent of the population in New York City is Asian American. We need the remaining 86 percent to stand up to the abuser, harasser or hater, to say, "'Stop it!'"

Whenever someone who looks East Asian coughs, they should not automatically be blamed for the China coronavirus outbreak. The stereotype is wrong, and finger-pointing will get us nowhere, says Dang Yuan. (01.02.2020)