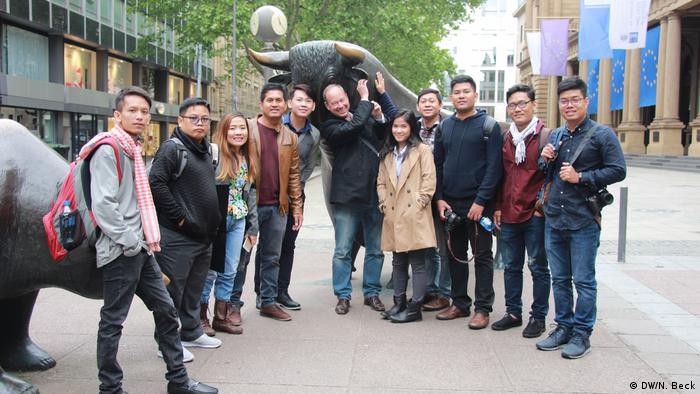 It’s the little things that surprise the Cambodian guests in Germany. How it doesn’t get dark until 10 p.m. at the end of May, how fast the high-speed ICE trains run, or how cool it is here, compared to the 40-degree heat they experience in their capital city Phnom Penh at this time of year. "And the streets are so clean!" they note.

For several of these Cambodian journalists, this was their first trip abroad. Their excursion to Germany was part of  DW Akademie's one-year project "Markets and Movers" for business journalists from Cambodia. The aim of the measure, funded by Germany’s Foreign Office, is to provide more in-depth understanding of business and economics reporting. 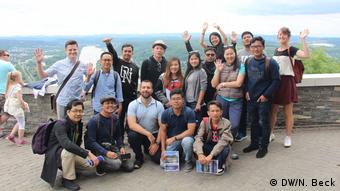 For some of the young journalists, it was their first trip abroad

For the first phase of the project, the nine participating media professionals gathered in Phnom Penh for a workshop exploring economic developments in Cambodia, Asia and around the globe. The journalists looked closely at the rising power of China and investigated issues such as Cambodia’s garment and construction sectors, two powerful engines behind the country’s robust economic growth of over 7 percent. The reporters also examined the nuts and bolts of good business writing and the ethical questions that reporters with special access to financial market information often face.

The stories behind the numbers

Part two of this project took the young Cambodian journalists to Germany. "It was great to visit the Frankfurt stock exchange. I’d only seen trading floors like this in movies and on TV," says Phearak Soeurng, a reporter for the Khmer Service of Radio France Internationale. 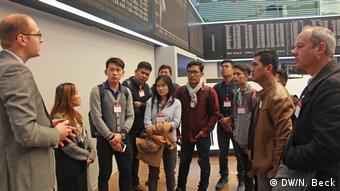 "I’d only seen trading floors like this in movies and on TV," says Phearak Soeurng about visiting the Frankfurt Stock Exchange

"People in Cambodia don’t know how a stock exchange works or what an index like the DAX and the Dow really is," Meta Kong agrees. She says visiting the Frankfurt stock exchange and talking to Deutsche Welle’s (DW) floor reporter Lars Halter helped her understand such issues much better.

Other highlights on the Cambodians’ agenda in Germany included a visit to the newspaper Frankfurter Allgemeine Zeitung where they met the digital editor-in-chief Carsten Knop. In Bonn, the young Asian journalists discussed German-Cambodian relations with representatives of German development NGOs. Media ethics were on the agenda in their talks with Andrea Rübenacker, CEO of Germany’s Catholic Media House, and Christoph Schmidt from the Catholic news agency KNA. They also observed how business and economics reporters work at DW’s business and social media desks. 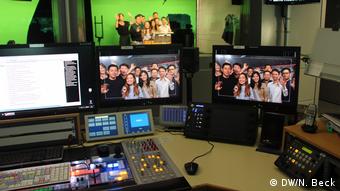 "I feel like the journalists in Germany are free to ask for information," says Vicheika Kann, who works for the Khmer Service of Voice of America (VoA) in Phnom Penh. Cambodian journalists don’t always enjoy this access to information as a result of tight restrictions on media freedom in the Kingdom. "I hope the situation in Cambodia will improve to become more like here in Germany." She says she’s learned a lot about politics and the economy through the "Markets and Movers" project, about turning numbers and data into good stories.

Experiencing the global stage at GMF

The final event on the Cambodians’ schedule in Germany was taking part in Deutsche Welle’s Global Media Forum (GMF) in Bonn, held at the end of May. This was a unique opportunity for them to network with media professionals and decision makers from all over the world. 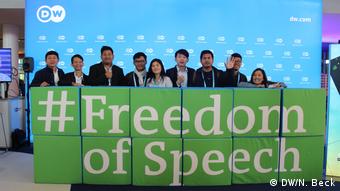 "Everyone was impressed with the high-level speakers at GMF," says Chandara Sor, DW Akademie’s local coordinator in Phnom Penh, who accompanied the journalists on their trip to Germany. “Many of the speakers were so young, but they’d already done such outstanding things in their lives. It was so inspiring to meet political activist Ludwing Moncada from Nicaragua, for instance, who had to go into exile. We have so much to learn from people like him.”

The journalists have taken these impressions home and will most certainly relay them in both their professional and personal lives. "In Germany, the Cambodian journalists saw how media freedom works in a democracy," says Sabina Casagrande, DW Akademie’s country manager for Cambodia. "In addition, they’ve made their German contacts aware of how hard it is for Cambodian media professionals to do their jobs properly in a country where journalists are challenged by censorship and repression."

The mystery of "Spargel"

After their return to Cambodia, the journalists have now entered the final phase of the "Markets and Movers" project. Each of them has to use their newly gained knowledge and skills to write and publish an in-depth economic story. Story ideas range from investigating the booming real estate market and the popularity of condos and apartments versus traditional Cambodian houses, to the effects that international coffee franchises have on local businesses or investigating how Cambodian tech start-ups compete with foreign competitors. 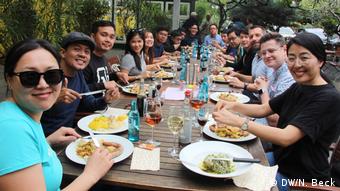 "DW Akademie’s trainers helped us find interesting angles to our stories," explains Vantha Phoung, a reporter for Thmey Thmey, a popular online news website in Cambodia. "Now we know much better how we can make economic stories interesting for our audience."

The "Markets and Movers" project will help media users in Cambodia better understand economic issues and how they are intertwined with politics and social relations. But in the end, it’ll be the smaller things that everyone involved in the project will remember: how good it was to learn from each other, how impressive the Cologne cathedral was, or how Germans obsess over a pale watery vegetable they call "Spargel".

Facebook use in Cambodia has exploded, especially among the young. But many don't know how to use it effectively and responsibly. A DW Akademie project aims to help change that. (15.11.2018)

DW Akademie has celebrated the successful completion of a three-year project in Cambodia aimed at increasing women's participation in civic life. The EU-funded project gave women confidence to make their voices heard. (07.12.2018)