Khieu Samphan, the last living leader of the brutal Khmer Rouge, appears before an international tribunal for his appeal against a genocide conviction today. The Khmer Rouge ruled Cambodia from 1975-1979. 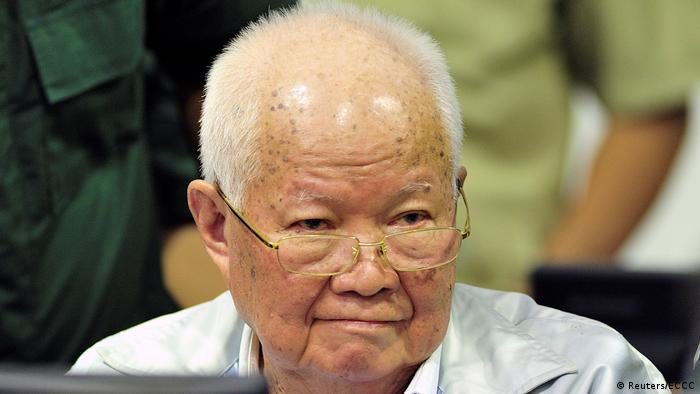 Khieu Samphan was convicted in 2018 in Cambodia

Khieu Samphan, the former head of state of the Khmer Rouge regime that ruled Cambodia for four years until it was overthrown in 1979, has appeared before a court in Cambodia on Monday.

He is seeking to overturn a judgment that convicted him of genocide against ethnic Vietnamese by the regime.

He is 90 years old today, and is the only surviving leader of the regime.

Tribunal spokesman Neth Pheaktra told news agency AFP that the hearing would last for four days until Thursday. Samphan is expected to be present all four days and expected to speak in his own defense.

"The appeal hearing is quiet important for both sides, the Cambodian victims and the accused," Pheaktra said.

Samphan's lawyer told judges on Monday that his client had been given inadequate time to prepare his initial defense and that the original panel failed to provide the grounds for the ruling in a timely manner, among other things.

"It should be null and void, and so I am requesting the Supreme Court chamber to...reverse the judgment," Kong Sam Onn said.

Samphan sat in a chair behind his attorneys, wearing a mask in compliance with COVID rules.

Prosecutors rejected the procedural arguments in their opening statements, saying that Samphan failed "to establish assertion that underlies his entire appeal, that he knew nothing, saw nothing and heard nothing of the crimes for which he stands convicted."

The verdict will not come until next year.

What is the hearing about?

Samphan was the former head of the Khmer Rouge regime that installed a reign of terror from 1975 to 1979.

The regime was led by Pol Pot, who sought to turn the clock back on the country by taking millions back into an agrarian utopia.

Millions were sent to labor camps in pursuit of the regime's aim to establish a classless society. In the process, an estimated 1.7 million people were killed.

Pol Pot died in 1998, evading prosecution for the death of nearly 2 million people. The UN established a tribunal to begin the trials of other leaders in 2009. 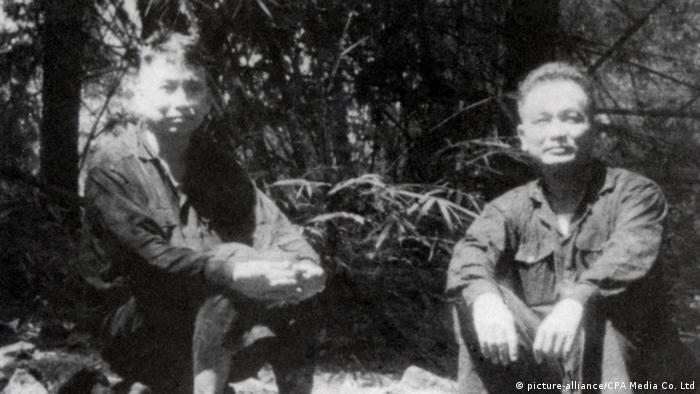 Pol Pot and Nuon Chea, pictured before they came to power

Samphan and Chea were previously convicted for crimes against humanity in 2014 by a UN-backed court.

Samphan's defense team is seeking an appeal before the Extraordinary Chambers in the Courts of Cambodia, backed by the UN for purposes of trying alleged perpetrators of mass atrocities.

The defense team is looking to question the evidence and argue there were procedural mistakes.

But observers say it's unlikely that his conviction will be overturned. Even if it is, he is already serving a life sentence for his 2014 conviction linked to forced transfers and mass disappearances of people. His conviction was upheld on appeal in 2016.

Samphan's 2018 conviction covers a litany of abuses, from murder and deportation of people to forced marriages and rape.

Nuon Chea, one of the Khmer Rouge's last surviving members, had been serving a life sentence in Cambodia for genocide and crimes against humanity.