France's foreign minister has put the death toll in the Central African Republic over the last three days at almost 400. Some calm has returned to the capital Bangui, though Muslim militia still patrol the streets. 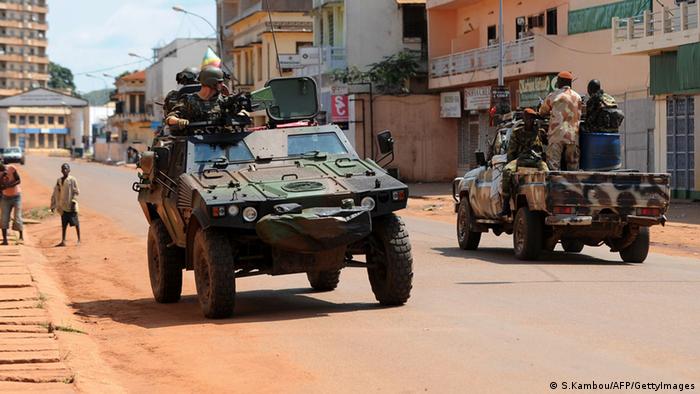 Around 1,600 French troops had been stationed in Bangui by Sunday morning local time, with the African nation's former colonial master moving swiftly to stymie the bloodshed between Christian and Muslim militia.

The latter - the Seleka rebel alliance that brought President Michel Djotodia to power - has now been officially dissolved. A coup in March overthrew long-serving Christian-backed president Francois Bozize, but Djotodia has been accused of losing control of the coalition as they targeted Christians after he came to power.

The UN Security Council has approved increased military action by French and African troops in a bid to try to end the violence and chaos in the Central African Republic. (05.12.2013)

The Red Cross estimated almost 400 bodies were collected across the capital as a result of fighting on Thursday. The carnage sparked France into action, while the situation in the Central African Republic dominated a long-scheduled African security summit that finished on Saturday.

“There are a certain number of operations under way throughout the country, and operations to disarm Seleka will begin. Our role is loud and clear, and it is first of all a security role. The order has been given to disarm and confine to quarters, we are doing this with the Africans from the 2,500-strong [United Nations] MISCA force.

"The problem is that some [Seleka fighters] are abandoning their fatigues to dress as civilians, making it difficult."

Other Seleka militiamen have ignored Djotodia's order to stay off the street, although the violence has subsided since the arrival of the French troops. The only reported fighting involving French soldiers - vociferously greeted by locals upon their arrival - was near Bangui's airport on Thursday, with four men in a truck killed after opening fire in direction of civilians.

The bloodshed flared on Thursday after a Christian militia attacked the capital, sparking retaliatory violence. Many of the victims were clubbed or hacked to death.

Sources reportedly told news agency Associated Press that Seleka rebels had raided Amite Hospital later that day, abducting and later killing 11 members of a Christian militia. Followers of both faiths took refuge in churches and mosques as the violence raged on.

The United Nations has estimated that as many as 6,000 child soldiers have been dragged into the conflict. Souleymane Diabate, of children's rights organization UNICEF, said children were being admitted to hospitals with wounds from bullets and other weapons.

"We are living through a major crisis and children haven't been spared," he said.