Calls Grow For Dissolution Amendment | News and current affairs from Germany and around the world | DW | 26.08.2005

The decision of Germany's highest court to allow early elections in September opens up the debate of whether parliament should be allowed to dissolve itself. The calls for a constitutional amendment are growing louder. 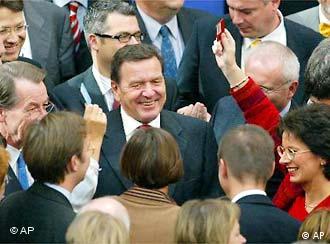 Germany's constitutional judges ruled in favor of new elections. The decision, which the court's vice president said was a choice "between plague and cholera" because the justices in Karlsruhe would either stop an election campaign that is already in high gear or bend the constitution to avoid a state crisis, puts the ball back in the politicians' court as to just how to sidestep such a problem in the future.

The ruling deemed Chancellor Gerhard Schröder's intentionally lost confidence vote on July 1 was constitution, but now politicians across the spectrum are reacting. The calls are growing from parliamentarians for an amendment to the country's constitution to prevent the chancellor from abusing no-confidence votes as he, or she, deems fit. 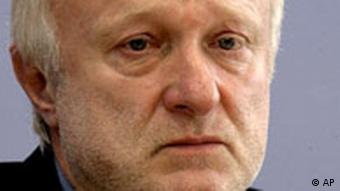 Leading the charge to strengthen parliament is Werner Schulz (photo) from the Greens, one of the two legislators who challenged Schröder's staged no-confidence vote on July 1. "The court has strengthened the position of the chancellor," Schulz told the Rheinische Post. "It has given the chancellor something like a right of dissolution without any checks against it."

Schulz argues that in the next legislative period, a new law should be passed that would give the Bundestag parliament the privilege of dissolving itself, which it does not have at the moment, and to set the hurdle for new elections very high, either with a two-thirds or even a three-quarters majority.

The Greens' parliamentary leader, Volker Beck, was even more vocal in expressing his disdain for Schröder's path for new elections. Beck said it was time to put the proper checks against the chancellor into place.

"We should see to it that parliament makes the decisions and not a 'Basta' chancellor, who as it is said by some in the media, can rule above the majority in parliament," Beck said on BR radio. 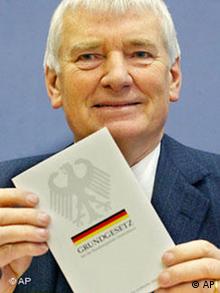 Constitution just fine as it is: Schily with a copy of Germany's Basic Law, doesn't believe it must be changed

That suggestion does not enjoy the complete support of the Social Democrats (SPD). The party's domestic expert Dieter Wiefelspütz does side with the Greens but Interior Minister Otto Schily (photo) feels that parliament should not receive the right to dissolve itself.

"I don't think it's necessary, nor even desirable, that we introduce a right of dissolution to the parliament," he told the Münchner Merkur. 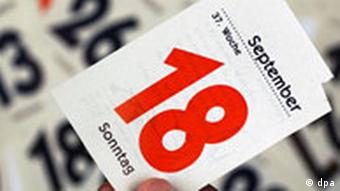 Even the potential beneficiaries from the September 18 elections, the Free Democrats (FDP) are split over the issue. Party leader Guido Westerwelle, who could assume a top post in a future cabinet with the Christian Democrats (CDU) under Angela Merkel, says such a debate is premature.

Others within the party, such as former Justice Minister Sabine Leutheusser-Schnarrenberger, described the power of a chancellor to call early elections as a "critical development."

According to President Horst Köhler, the court's decision demonstrated the stability of the country's democracy. Nevertheless, Köhler, whose approval of Schröder's demand for an early election led to the appeal to the German Constitutional Court, feels that politicians and parties must take a hard look at the dissolution issue.

An early general election in Germany will take place on Sept. 18 after the country's constitutional court judges on Thursday threw out complaints challenging the constitutionality of an early poll. (Aug. 25, 2005)

Germany's highest court has cleared the way for next month's general election. Now there needs to be follow through with a constitutional amendment allowing the dissolution of parliament, says DW-WORLD's Marc Young. (Aug. 26, 2005)

In September, Germans will elect a new parliament. Today, the country can look back on a checkered history of Bundestag elections since the German Federal Republic was founded in 1949. (Aug. 5, 2005)