Calls for Lukashenko to face international tribunal | Europe | News and current affairs from around the continent | DW | 05.10.2021

Members of the European Parliament meeting in Strasbourg are poised to demand international prosecution against the disputed president of Belarus for repression. 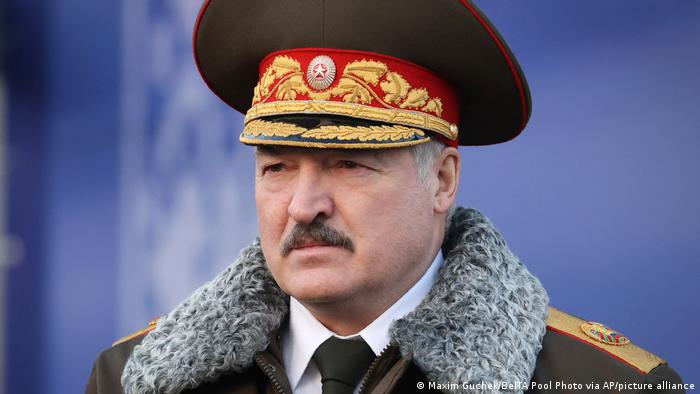 The West sees Alexander Lukashenko as a pariah, Moscow sees him as a wildcard, EU MEPs want to see him on trial

Members of the European Parliament are poised to increase their pressure for the international prosecution of Belarusian President Alexander Lukashenko on charges of involvement in mass torture and repressions.

On Tuesday, Lithuanian MEP Andrius Kubilius, a former prime minister, told the house in Strasbourg that "Lukashenko must be taken to the International Court of Justice."

His position was supported by German Green MEP Sergey Lagodinsky, who said "legal proceedings for torture must be started against Lukashenko himself."

That suggests the demand is likely to make it into a European Parliament resolution to be voted through the full house this Thursday.

The MEPs say President Lukashenko personally ordered the illegal arrest and torture of opposition demonstrators who protested the disputed presidential elections of August 2020 — at least 700 of those arrested remain in jail.

According to Eamon Gilmore, the EU's Special Representative for Human Rights, setting up an international tribunal to investigate crimes in Belarus would be possible, "where the state itself is either unwilling or unable to act and to bring these people to justice."

The Strasbourg debate also focused on migrants, mainly from Iraq, which Minsk is sending across its border into Poland, Lithuania and Latvia.

At least 5 people are known to have died during the crossing.

"They [the Belarus government] lure people to Minsk, who they transport towards the border in unmarked transport vehicles by men in unmarked uniforms," she told the house.

Poland, Latvia and Lithuania all remain under states of emergency — after more than 6,000 people illegally crossed the border this year compared to 150 last year.

During a debate in the European Parliament, European Commissioner Ylva Johansen said arrivals had "dropped significantly in recent weeks."

Minsk's defiant gestures toward the EU

On Monday, however, the parliament in Minsk approved a bill to end an agreement Belarus holds with the EU allowing refugees to be returned there.

Minister of Internal Affairs of Belarus Ivan Kubrakov said, "we have duly notified the EU that we are suspending this agreement."

In response, the European Commission plans to end a visa agreement for Belarusian government officials. This would require significantly more paperwork for applicants and increase the cost of visas, which is currently €35 ($40.55).

The EU has already imposed a raft of sanctions against Belarus, which started after the elections of August 2020  —  a vote the EU does not consider to have been free and fair.

The subsequent crackdown on protesters and an incident in which Belarus authorities forcibly brought a Ryanair plane into Minsk to pluck an opposition journalist from the plane have led to four rounds of punitive measures.

A total of 166 senior Belarus figures are currently subject to restrictive measures such as asset freezes and travel bans.

At the end of June, the EU also imposed economic sanctions, including a ban on Belarus accessing EU capital markets and limiting EU imports of potash — a lucrative Belarus export.

MEPs are set to use their resolution to call for haste with the fifth round of sanctions currently being prepared by the EU External Action Service.

While the border issue is currently a priority for the EU, President Lukashenko is facing another crisis that has diverted the attention of authorities in Minsk and resulted in a confrontation with Moscow.

The situation stems from an incident on September 28, in which an IT specialist and opposition supporter was killed during a KGB security services raid on his Minsk apartment but not before the man killed one of the agents in a gunfight.

Belarus state media released a heavily edited video of the raid that includes pictures from inside the apartment before the agents broke down the door and entered.

The Lukashenko regime labeled the man a "terrorist," and later detained a reporter from the pro-Kremlin Russian newspaper Komsomolskaya Pravda, as well as forcing the publication to stop circulation in Belarus and blocking access to its online site.

The moves came after the paper published an interview with a classmate of the slain IT specialist and which Minsk believed painted him in a favorable light.

In response, Kremlin Spokesperson Dimitri Peskov said "we expect the lifting of these restrictions to ensure the free work of our esteemed publication [Komsomolskaya Pravda] on the territory of our allied Belarus."

Jonathan Millins, a PhD researcher on Belarus at the University of Antwerp, says the statements are evidence of real anger in Moscow.

"It exposes something people in the West don't really see," Millins told DW, "that Lukashenko is a wildcard and is not as much under the thumb of Putin as we might think."