By train, 2 continents, from Beijing to St. Petersburg

It was the realization of a dream from a childhood obsessed with trains: taking one of the world's longest train rides, on the Trans Mongolian Express and Trans Siberian Railway. 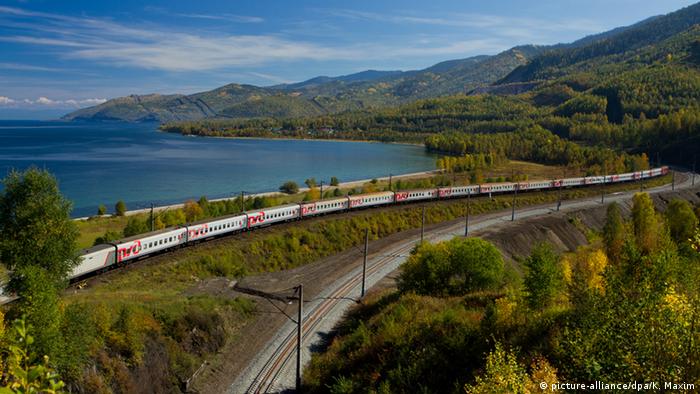 The trip went from Beijing, China, via Ulaanbaatar, Mongolia, and across Russia to Moscow and St. Petersburg with whistle stops in between. It spanned two continents, seven time zones, many cultures and more than 7,900 kilometers (4,900 miles).

The logistics are hard to organize on your own, so I traveled with G Adventures. Arriving several days early in Beijing to sample the city, I munched on deep-fried scorpion in a market, climbed ancient drum and bell towers, explored the sprawling Forbidden City and saw the preserved body of Mao Zedong in a mausoleum more resembling the shrine of a deity. Then our tour group - six in all -met for our three-week adventure, led by guide Aleksandr Paramanov.

A week was spent in close quarters aboard trains. Each car had a hot water boiler, but you had to bring your own food, water and tea and get into the right mindset: Relax, chat with new friends or just gaze at the ever-changing landscape. Or befriend the carriage attendant, buy a few things from her and get on her good side. 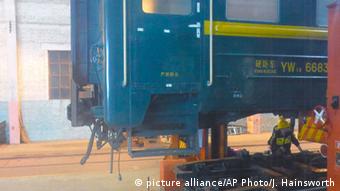 Changing the wheels before entering Mongolia

The Trans Siberian is not a special train with specific runs. It's a regularly scheduled train; you book sections and get on and off as you wish.

Our first run, departing the madness of Beijing's main station for Ulaanbaatar, was filled with Chinese and Mongolian travelers heading home. After Chinese officials searched the train and stamped passports in the late evening, the train was taken apart. Carriages were moved into sheds, giant jacks raised them six feet and wheel bogeys were replaced to handle Mongolia's gauge rail system.

We awoke to see the sandy-brown, scrub-dotted wastes Gobi Desert. Ulaanbaatar, the world's most remote capital city, comes into view as the train rounds a bend. Yurt tents dot the hills around the city of 1.1 million where more than 100,000 nomads still live under canvas. 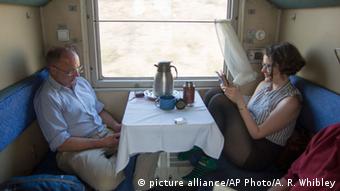 We explored the Black Market, a massive jumble of stalls containing everything from horse blankets to antique Nazi bayonets. Beware of pickpockets not only in the market but throughout the city. I lost my credit cards in a brief bump with someone.

We stood amid Buddhist ceremonies with monks chanting and sampled horse cooked on flat metal grills. Later, we slept in a yurt on the steppes (Mongolian plains). A stove for heating needed stoking in the middle of the night. Cows meandered through the camp, the twilight on the distant hills making it seem like a scene from Middle Earth.

In the heat of the banya

Boarding the train again, we readied ourselves for Russian border officials. Passports were taken, bags searched and sniffer dogs led through the train.

After 51 hours, we arrived at Irkutsk, touring with a guide whose grandparents had been given 15 minutes to pack and leave for a collective farm in Stalin's era.

Then on to a guest house in the village of Listvyanka on the edge of Lake Baikal, the world's largest freshwater lake. Our host took us into a traditional Russian banya. Bathers sweat it out in a sauna, then jump in a cold pool. Back inside, we were thrashed with birch leaves before jumping in the pool again. Then another scrub with coarse sponges, a warm rinse and surprise cold dousing - brutally refreshing.

A trip through time and history 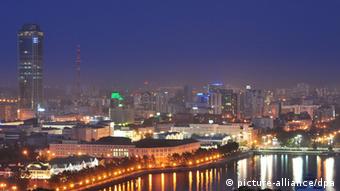 On to Yekaterinburg, a city on the dividing line between two continents, a two-day ride through forests and rolling hills on rails that once carried Soviet exiles heading the other way to the gulag. In another compartment, strangers fed my travel-mate caviar, crabmeat, eggs and vodka.

Yekaterinburg's highlight is the Church of the Spilled Blood, the golden-domed sanctuary built on the site where the last tsar, Nicholas II, and his family were massacred by the Bolsheviks. A chapel marks the execution spot.

Back aboard bound for Moscow, we were split between compartments, attempting communication with friendly but frustrated Russians. In the Russian capital we explored Red Square, the Kremlin as well as Soviet monuments and art galleries.

Then, more than two weeks after departing Beijing, we boarded a night train for St. Petersburg. Leaving that final train was hard. We'd all lived a dream.