Businesses and refugees come together | Germany | News and in-depth reporting from Berlin and beyond | DW | 03.12.2016

Businesses and refugees come together

One thousand companies are already involved in refugee initiatives. 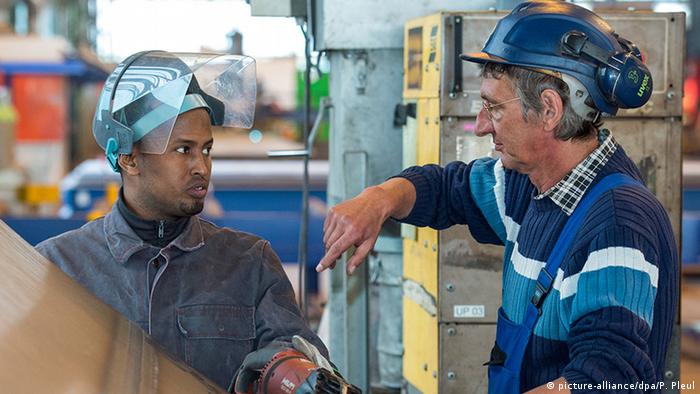 Air conditioning and ventilation technology is a sensitive matter. If anything goes wrong during the installation of large cooling systems people could be seriously injured - specifically, by leaking gas. For the Osnabrück-based medium-sized company HEIFO that means qualified personnel are the key to success. But finding such personnel is difficult at the moment due to demographic shifts. "We suffer from a lack of specialists," says managing director Martin Rüterbories. 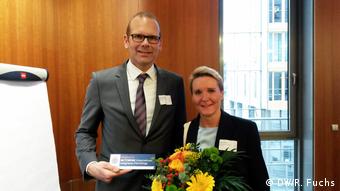 That has led Rüterbories' company, which employs some 240 people, to attempt to attract refugees as skilled laborers, not only for economic reasons but also out of a sense of civic duty. "Two young Syrians recently completed internships with us," says Rüterbories. The only problem is that there are a number of hurdles to be cleared before refugees can actually become employees: lack of language skills, legal uncertainties regarding residency status and practical issues such as the recognition of qualifications and certificates all complicate matters. Intercultural differences must also be carefully dealt with. That, alongside day-to-day operations, has simply overtaxed many companies so far.

It has been nine months since German Chambers of Industry and Commerce (DIHK) President Eric Schweitzer and Federal Minister of Economic Affairs Sigmar Gabriel (SPD) joined hands to confront the situation. To this end, the two christened the "Companies Integrate Refugees" network - a campaign designed to expedite the integration of refugees into the professional workforce. The network has grown to include more than 1,000 companies, a fact that was celebrated in Berlin on Thursday, together with the minister for the economy. Gabriel's motto, which builds on Chancellor Merkel's oft-quoted slogan, is: "Not a question of 'we can do this,' but rather, we are doing it."

The businesses which gathered in Berlin have already proven that they want to do something. All of them have offered internships or traineeships to refugees in their small or medium-sized companies. Still, the companies must navigate a number of obstacles before refugees can actually become skilled laborers. Beyond legal issues that means, above all, language barriers, as is the case at the refrigeration technologies company HEIFO. "The topic of language skills is an important safety factor for us," says managing director Rüterbories, who explains that safety training for cooling systems is given in German. "The job can only be done if an employee completely understands those instructions." 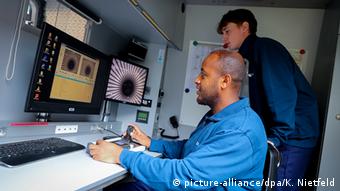 For the two young Syrians at HEIFO that means that one of them will be offered a training position based on language and specialization proficiency. The other will be offered further German courses by the company after his internship has been completed. The company also wants something else from politicians: It says that the government has to come up with more flexible models to allow refugees to better integrate language courses at work. "We see a lack of extra-occupational training," says Rüterbories. Long periods of language training outside the workplace distance the refugee from the company itself, which often leads to the problem: out of sight, out of mind.

In order to keep companies from feeling left to shoulder the burden alone, the network has allotted finances to employ 150 so-called "welcome guides." These guides are to work as nationwide go-betweens for both sides - mediating, answering questions and cutting through bureaucratic red tape. Despite the help of these new guides, the DIHK president is encouraging member companies to pace themselves. "It takes between five and ten years before a refugee can be fully integrated into the job market."

If you start training you can finish it

To ensure success, the government recently introduced a new integration law. It is designed to clear up legal uncertainties facing refugees and companies. Now, for instance, when a refugee begins a traineeship they are absolutely entitled to finish it, even if they are denied asylum during that time. Thus, businesses and refugees can be guaranteed security and stability during the three-year training period.

Should a company decide to extend a contract of employment to a trainee, he or she can continue to work for at least two years without having to initiate any further application processes. DIHK President Schweitzer is calling for politicians to put this so-called 3+2 rule into practice in an "unbureaucratic, transparent and understandable manner." In exchange, Economics Minister Gabriel has advised businesses to set realistic goals. "We won't see large numbers of skilled laborers until we get to the end of this road."

Only 4,300 refugees out of a planned 100,000 have started working at so-called "one-euro jobs" as outlined by Germany's new integration law. The Federal Labor Agency has said the low figures are no cause for concern. (02.12.2016)

Germany's employment agency has estimated that at least 30,000 refugees have found jobs in the country since spring 2015. But the government is struggling to help many more unemployed enter the workforce. (10.07.2016)