Israeli officials say thousands of cubic meters of crude oil have spilled into a desert nature reserve from a burst pipeline. The Environment Ministry says the spill in a rift valley valued over eons is a major disaster. 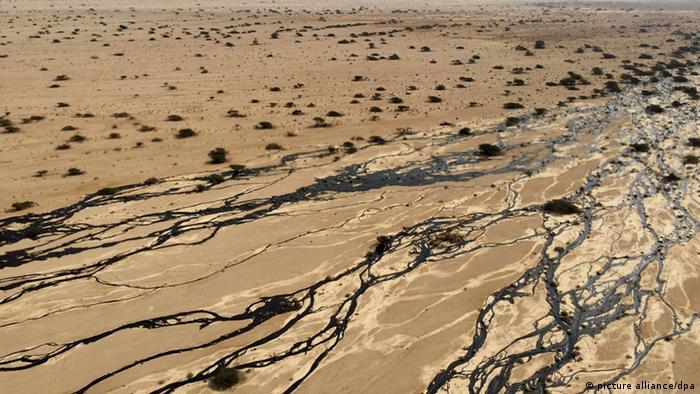 A burst pipeline in southern Israel has released massive amounts of crude oil into the Arava desert near the Jordanian border, officials said on Thursday.

Police said three people were hospitalized after inhaling fumes from the spilled oil emanating from the rupture just north of the Red Sea resort city of Eilat.

Israel Radio said that the spillage occurred during maintenance work on Wednesday evening, and caused the main road leading to Eilat to be closed intermittently while emergency teams worked to close the leak.

The pipeline burst in the Evrona desert nature reserve, known for its deer population and douma palms.

"Rehabilitation will take months, if not years ... This is one of the State of Israel's gravest pollution events," he added.

A ministry spokeswoman said the spill was "a couple of kilometers" (more than a mile) long, adding that emergency teams had prevented the oil from reaching nearby Jordan, just some 500 meters (yards) away.

A spokesman for the company, Ronen Moshe, said the leak had now been stopped and that reasons for the spill were under investigation.