Bundesliga: Where must Borussia Dortmund improve to topple Bayern Munich?

Despite being one point behind Bayern, Dortmund come into Der Klassiker with a handful of weaknesses and an awful record against the Bundesliga champions. Jasmine Baba explains what Dortmund needs to improve on. 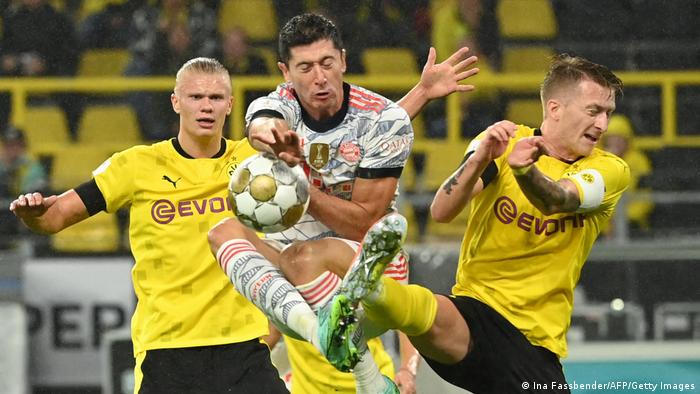 At risk in possession

The first area where Borussia Dortmund have been lacking this season is how they approach possession of the ball.

When playing out from the back, Marco Rose's team use a rigid approach defined according to their chosen formation. For example, if they use a 4-3-3 formation, there will always be one pivot player supporting their center-backs when building up play.

This inflexibility makes Dortmund vulnerable to man-to-man marking — unsurprisingly, an increasing number of teams are starting to use that as their main tactic against them. Opponents are easily able to track Dortmund's passing options and put the team under pressure.

Dortmund's solution is to play the ball wide, but this makes it even easier to isolate their players, force long balls and gain possession of the ball in dangerous areas. A good example of this is shown below, depicting Bayer Leverkusen's first goal in Dortmund's 4-3 win. More dynamic movements in order to occupy important spaces, such as rotations between players — especially in the center of the pitch so they don't get isolated on the wings — could be a more effective solution.

Vulnerable to the counter-press

If an opponent decides not to pressure Dortmund high up the pitch, the Black and Yellows' issues become different but have the same root cause: structure and organization.

While passing the ball around, Dortmund tend to push players forward and far apart. This makes it difficult for them to defend effectively immediately after losing the ball (known as Gegenpressing or counter-pressing). In this way, Dortmund have conceded goals in numerous matches this season, specifically against Stuttgart, Freiburg and Leverkusen.

Against Bayern, BVB would be better served by balancing their offensive structure by assigning more cautious roles.

The general rule is to have both center-backs, a pivot player and the out-of-possession full-back to create a numerical overload against your opponent's strikers. This makes defending easier, because it stops every player being in a one-on-one situation - see Nico Schulz vs. Sporting Lisbon for the first goal Dortmund conceded in the Champions League last week. 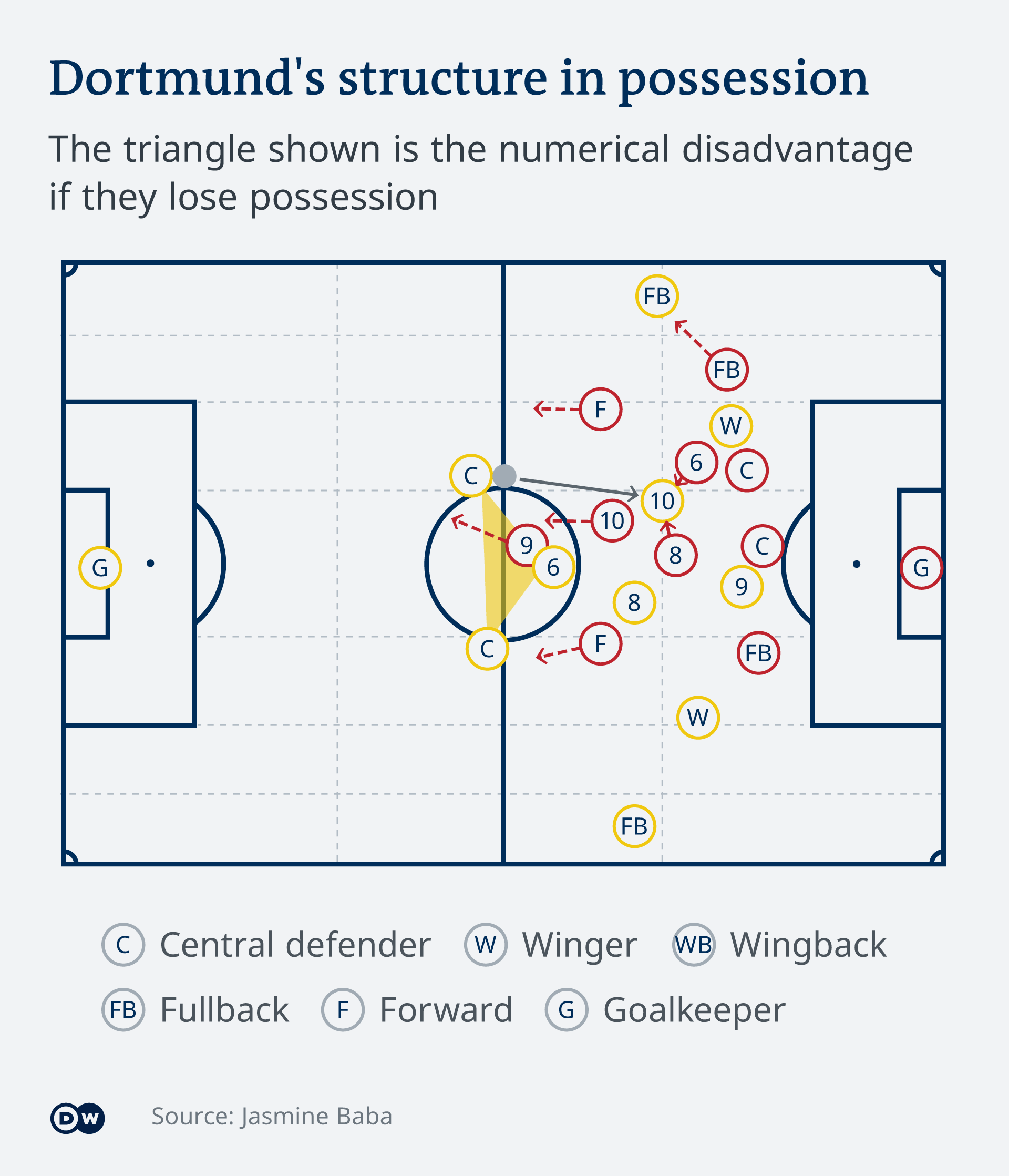 Dortmund's own pressing late and ineffective

Borussia Dortmund have used a variety of formations this season including a 5-3-2 (which was criticized by the players), a 4-4-2 diamond, 4-3-3 and even a 4-2-3-1 in their latest match against Wolfsburg. Head coach Rose says he wants to defend actively and high up the pitch.

No matter the structure and formation, Dortmund always seem to suffer from their opponents passing through them on the wings. The reason for this lies in their approach to pressing and isolating the opposing team.

Rose's side consistently try to force the rival team wide. This means their strikers pressure the opposing center-backs from the middle of the field, forcing them to pass the ball back out wide. Once that pass is played, it triggers Dortmund's players to close down the full-back about to receive the ball.

This whole process of isolation is supposed to win the ball high up the pitch, but if it isn't done with a huge degree of intensity, then it leaves Dortmund vulnerable, with opponents easily able to play through the press.

Since it is up to players in the center of midfield to track their opponents' runs and movements, Dortmund often face timing issues. If this timing is off, the whole approach fails, as the goals conceded against Bayern in the Super Cup, plus against RB Leipzig and Bayer Leverkusen in the Bundesliga, demonstrate.

After failing in the aforementioned process out wide, Dortmund were vulnerable to through balls, crosses and switches of play. 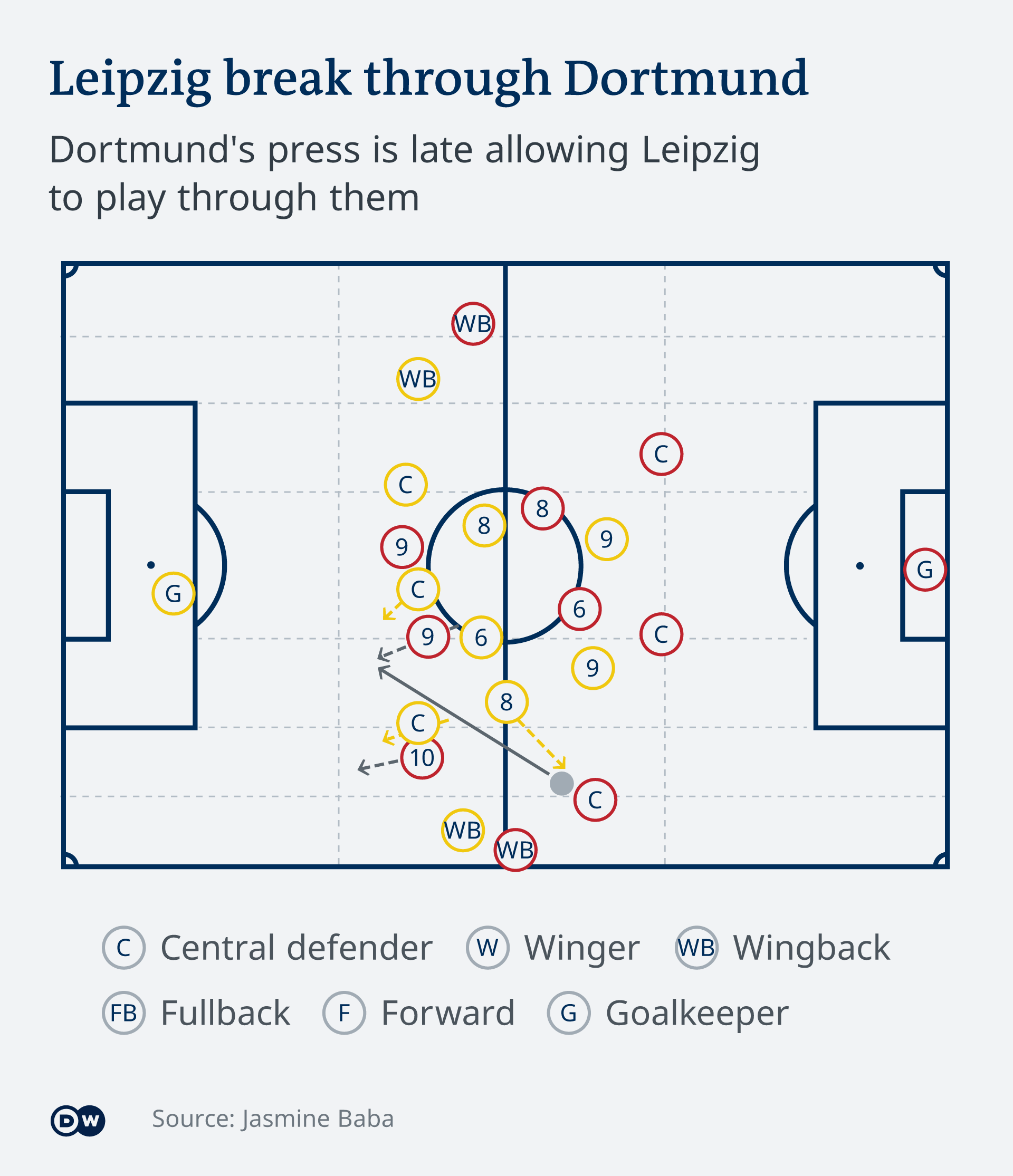 This has one final consequence: an increase in one-on-one situations in the last line of defense, not necessarily Dortmund's defensive speciality, as seen against Sporting Lisbon.

The upcoming game against Bayern Munich could define the rest of Dortmund's season.

If they really want to challenge Bayern, their use of possession must be smarter, their counter-pressing more intense and their timing better.

It'll be down to Rose to fix these problems before the game, otherwise we might just see Dortmund crash out of the title race early yet again.