Schalke 04 have been relegated from the Bundesliga for the first time in three decades. Defeat away to Arminia Bielefeld on Tuesday night sealed their fate, but the club's problems may just be beginning. 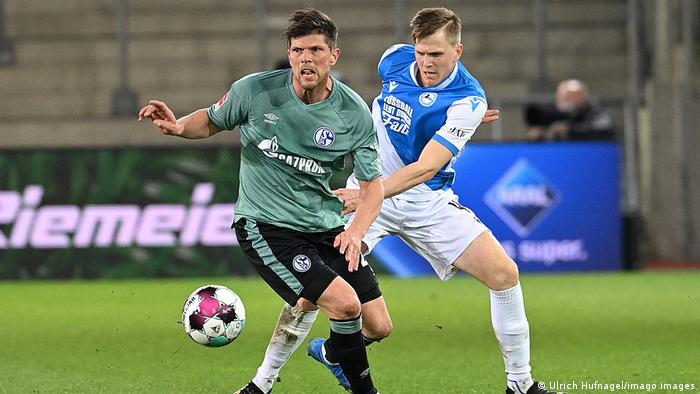 A loss to Arminia Bielefeld condemned Schalke to relegation

Schalke 04 have been relegated from the Bundesliga following a 1-0 defeat away to Arminia Bielefeld.

The Royal Blues, who were Bundesliga runners-up as recently as 2018, have only won two league games since January 2020, and their fate was sealed on Tuesday night with four games remaining.

For Schalke, it's long been a question of when and not if. The club from Gelsenkirchen in western Germany have endured a miserable 15 months with five different head coaches, high-profile resignations, negative headlines, supporter protests and existential financial problems exacerbated by the coronavirus crisis.

As they plummet into the second division for the first time since 1991, Schalke are saddled with €217 million ($257.8m) of liabilities.

In summer 2020, long-serving club chairman Clemens Tönnies, a local billionaire who made his estimated €1.4 billion fortune in Germany's meat processing industry, resigned in the wake of a racism scandal and following a coronavirus outbreak at one of his slaughterhouses.

Tönnies, 64, had been on Schalke's supervisory board since 1994, and his era as de-facto boss saw the club win three German Cups and reach the Champions League quarterfinals in 2008 and the semi-finals in 2011.

But a series of poor managerial appointments in recent years, combined with a hugely expensive but unsuccessful transfer policy, has seen Schalke slip gradually down the league.

Gerald Asamoah, a former player now on the staff at Schalke told Sky:

"We knew what was coming but when it happens and you realise it's over, it's brutal.

"If you're last in the table, have 13 points... If someone says they gave it everything... I don't know what I would do with this person."