RB Leipzig had a golden opportunity to put the heat on Bayern Munich at the top of the Bundesliga when Hoffenheim visited the Red Bull Arena on Friday night. It was one that a blunt Leipzig failed to seize. 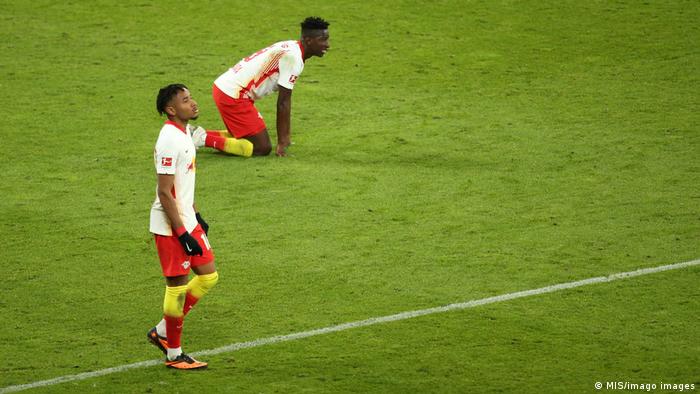 RB Leipzig have failed to score in their last two home games.

RB Leipzig's decision to not adequately replace Timo Werner last summer has cost them countless points. A season that should see them finish second could have been so much better. With at least one key player leaving and their coach being linked again with Bayern Munich, they may look back on this season as the one that got away.

The void of quality in attack since Werner departed for Chelsea is the elephant in the room for Leipzig. Bayern have Robert Lewandowski, Wolfsburg have Wout Weghorst, Eintracht Frankfurt have Andre Silva and Borussia Dortmund have Erling Haaland. Leipzig have now failed to score in the last two home games, and therein lies the problem.

Yussuf Poulsen is the best option at Julian Nagelsmann's disposal, but the closest the Dane got was a 96th minute header that was chalked off after a lengthy VAR consulation. Given how well Hoffenheim had defended, it would have been cruel to see them lose in such a manner. The replay showed that the Poulsen's header had gone in via his right hand. 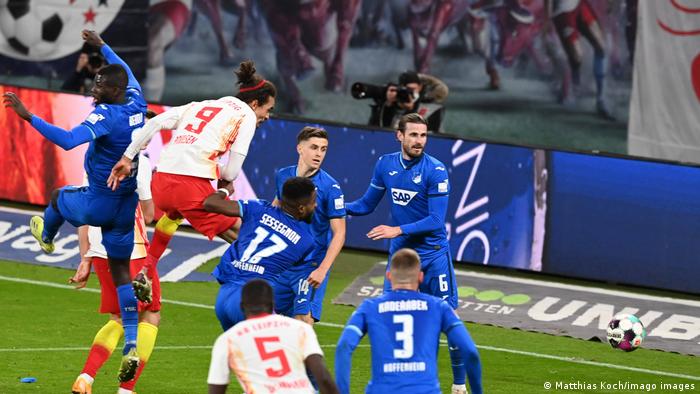 RB Leipzig looked to have stolen the points at the death — but this Yussuf Poulsen header was disallowed.

"It definitely wasn't our best game," Nagelsmann told DAZN at fulltime. "Even though we didn't create enough goalscoring chances, we were the more dominant side and were a bit unfortunate at the end with Yussuf Poulsen's header."

Leipzig are in the last four of the German Cup and reached the knockout phase of the Champions League and are second in the Bundesliga. As far as they're concerned, it's been another step forward in the young club's development.

But the two points that went begging on Friday night would have closed the gap on Bayern Munich, who visit in-form Wolfsburg on Saturday, to two points — just at a time when the champions are looking vulnerable. 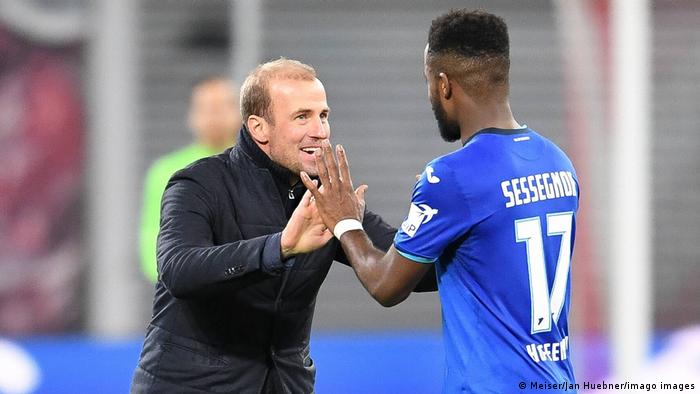 Hoffenheim must be credited with a fantastic defensive performance. The young American Chris Richards, on loan from Bayern, looked assured despite the growing pressure Leipzig put them under and Ryan Sessegnon, another loanee from Tottenham, had a good night at left-back. And when called upon, Hoffenheim captain Oliver Baufann stood tall in goal.

Leipzig were increasingly reduced to efforts from distance but their best chance of the night fell to another American, Tyler Adams. But he couldn't connect when he was picked out at the far post. It was another night when Leipzig controlled the game but couldn't score, the story of their season.

On the weekend when Dayot Upamecano's future move to Bayern Munich was confirmed and Borussia Dortmund's deal for Gladbach's Marco Rose was made official, the two big sides ended up with contrasting draws.